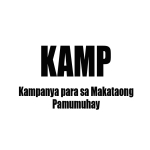 President Benigno Aquino III’s pronouncement scrapping the Priority Development Assistance Fund (PDAF) could have been an affirmation of government’s subservience to people’s sovereignty, but the president chose to hoodwink the people and cheat on his own “matuwid na daan”.

He announced the abolition of the annual Php25 billion lump-sum appropriation and its removal from the discretion of lawmakers, but in the same breath offered it again as a multi-purpose fund for legislators. What makes this more suspicious is the president’s continued silence on his own and Vice-President Jejomar Binay’s discretionary funds of P450 billion and P200 million, respectively. Aside from the 7.8 % exclusionary GDP growth, this is another sign of PNoy’s misplaced priorities.

The Kampanya para sa Makataong Pamumuhay (KAMP) denounces the president’s cheap tricks. People’s taxes are people’s funds and must be used for the benefit of the people.

Prioritize public spending on people’s protection against poverty and inequality

Official statistics show the country’s glaring poverty incidence and gross disparity in terms of access to resources and essential services. Measures should be implemented to ensure income and wealth redistribution, and protect the people already reeling from the financial crisis that threatens to get worse. PNoy should go beyond the confines of his current fragmented, temporary and palliative social assistance and institute a comprehensive and universal social protection program provisioning for a life of dignity for all. This includes:
Universal health care based on the primary health care principle that ensures the well-being of the citizenry and not limited interventions in times of illness;
Generation, not merely facilitation, of employment with living wages and of livelihoods protected against unfair competition and monopoly by big capitalists;
Guaranteed and quality education;
Living pension or subsidy for the elderly and the differently abled;
Socialized housing programs that guarantee adequate and humane shelter for all;
Access to and availability of basic services such as water, power and transportation.

KAMP does not buy the line that only Senators and members of the House of Representatives know what development projects to propose and approve and how much of the people’s money should go to their favored districts and sectors. This lame excuse for patronage politics, in effect, continues to distort national economic planning and undermines development programs. Provided there are clear national priorities and responsive development plans, local development and resource allocations are best left to the local government units. This is based on the assumption that the pork barrel system is eliminated from the national down to the local level, and people’s participation is accepted as part of the political process.

Lump-sum funds or lawmaker-sponsored projects only foster increased reliance on favors from the president and the legislators. The question of ensuring that territorial and political subdivisions get equitable share of national revenues immediately calls for a review of the Internal Revenue Allotment (IRA) formula and criteria to check if these are still relevant to the current needs of localities.

The pork barrel scandals involving public officials also point to the need to fix loopholes in budget laws and processes starting with the review and amendment of the Administrative Act of 1987. The national budget exercise has been corrupted to an extent that the “power of the purse” which used to be exercised by Congress to check and balance the president’s fiscal powers has been surrendered by legislators more concerned with getting a substantive slice of public funds.

P-Noy’s statement on the PDAF seems to focus more on the Napoles P10 billion pork barrel scam by banning the NGOs from receiving public funds. Yet this is just the tip of the iceberg. What has scandalized the people to outrage are the extent and thoroughness of budget scams that have defrauded them of vital social services and protection, and the involvement of the executive and legislative officials, the bureaucracy, NGOs and even religious leaders. Implicated too is the judiciary by turning a blind eye to the scams. More than ever, the need to pass the Freedom of Information bill becomes more urgent, and tests the administration’s and legislators’ sincerity in addressing the web of corruption that has engulfed the entire political system.

All transactions related to the misuse and abuse of all discretionary funds, not just PDAF, must be investigated by the newly formed Inter-Agency Anti-Graft Coordinating Council (IAAGCC). This includes appropriations and disbursements done under the administration of PNoy.

IAGCC’s investigation must not result only in punishing the guilty and in recovering stolen assets. The council’s work must also aid in strengthening laws and processes on the utilization of public funds and point out the accountability—the sins of commission and omission—of concerned public officials in the performance of their duties. The list of robbers in government includes all those who feign public interest for personal gain and disregard the people’s will. PNoy joined this list when he attempted to cheat the people out of their victory over corruption.

Let the Million People March to Luneta and Mendiola on Monday, 26 August 2013, be a reminder to the president and all public officials that this government exists to serve the interest of the people and not the other way around.

Fund Social Protection Against Poverty and Inequality!
Life of Dignity for All!

KAMP is a broad, multi-sectoral and inclusive network that is focused on pushing for universal and transformative social protection towards attaining social justice. It pushes for a five-point agenda: employment guarantee, universal health care services, adequate food, humane housing, and social insurance particularly universal pension for the elderly and differently-abled, and agricultural insurance.