[Statement] Corporate Rights vs Labor Rights – Can we handle it with care? -DEU

Posted on May 5, 2013 by Human Rights Online Philippines Leave a comment

Corporate Rights vs Labor Rights – Can we handle it with care?

Onthe matter of Digitel/PLDT’s conduct of its corporate rights 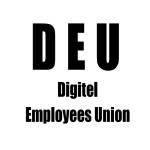 Lets start on Mr. Pangan clarification where he said, “For one thing PLDT and its subsidiaries or affilliate companies have actually hired 388 employees from Digitel as regular, not contractual employees” …. this is something commendable but what he does not say is that Digitel employees need to apply for Early Retirement Program before they can be rehired. WHY NOT JUST LATERRALLY TRANSFER to PLDT subsidiaries and affilliates if there is no catch?

But there is a catch—they are contractual not regular, signing three months or six months contracts if they pass through the tedious ‘re-hire’ process.

We, the remaining 95 DEU members very well know that the job we hold still exists, contrary to the claims of Mr. Pangan… thats why we did not resign or apply for ERP. In fact even before March 15, the supposed last day of effectivity of redundancy, newly hired and rehired workers more than our number are already working with us side by side.

We challenge the Digitel PLDT to allow the DOLE and other pertinent institutions to conduct an investigation and what they see would be proof enough.

2. On the issue of end-of-life of Digitel facilities.

In connection to the issue of end life stage. If we will talk of the backbone maybe yes, but is this not the same backbone that Suncellular uses? This claim is questionable since there are areas, especially in Luzon where there are no PLDT facilities only Digitel’s. Will the company lay down new facilities or utilize what is there?

Second, if we talk about the Digitel lines from cabinet boxes to the consumers, the lines are very alive, and these are the jobs that belongs to us and what we have been doing for the past two decades.

We may agree that retiring the backbone of Digitel by its present owner (PLDT) is a company prerogative for it maybe be more economical to tap and use the PLDT backbone than to replace the old Digitel facility.

Nevertheless, the present owner of Digitel is duty bound to fulfill the terms under the franchising/ licensing agreement drawn up with the National Telecommunication Commission (NTC) that will expire on 2024. They must ensure that the facilities are still operational for a period of thirty years.

Again we are calling the Congress or the Senate – the only authorized body for issuing the franchise license to look into this concern.

Let the facts speak for themselves:

On April 21, Sunday, at 3am in the morning, while the street lights and the building lights were turned off, thirty workers who were then at the picket line,some of whom were sleeping, were rudely awakened by security forces who were tapping their shields with truncheon and sticks, hurrying to come between the picket area and the front of the building.

There was no order shown to justify the action of the security forces nor a semblance of negotation. Only power-tripping. The PLDT management did not treat them as workers with a labor dispute, but as criminals and lepers – only good enough to be driven away and hauled to jail.

If this was not enough, the three week old protest camp, now by the sidewalk is continously harrassed and intimidated by MACEA (Makati Commercial Estate Association ) headed by OIC Ed insisting that the pedestrian rails is ‘private property’ as well as the trees. From Day 1 PLDT has only showered the workers with intimidation, harrasment, and physical force. So much for improving lives.

4. On the issue of dealing with workers constitutionally guarranteed rights.

The line must be drawn in line with the government liberalization policy –it is not totally free of parameters, the parameters are set by law.

Just like management prerogatives – it has limitations when it goes contrary against the workers rights, like in this case .

We call on Digitel/PLDT not to ram your business prerogative down our throat especially if it will compromise or water down our constitutionally guaranteed right to security of tenure, to union and to bargain collectively.

The Supreme Court clearly DECIDED that DEU is Correct and the Digitel now owned by PLDT is wrong, not only wrong the Supreme Court further found Digitel of guilty of Unfair Labor Practice not for only one count but for three counts.

Deal with us with respect. You do not deserve more respect and us less just because you have money,influence and resources and we have not one-tenth of your net worth.

Are we asking for too much? We have recieved favorable decisions every step of the legal ladder yet you continue to squirm out of your obligation and duty to implement the Supreme Court decision.

But by just simply alleging that no more bargaining unit because Digitel PLDT had already “redundated” all its employee then rehired those who submit before you as “regular”. Why rehire those who already retired? Why not absorb us that still want to work? What the heck? For once, Digitel/PLDT heed and uphold our rights!