Human rights discourse is very vibrant worldwide, in Asia, and in the Philippines.  It is the central concern of the disadvantaged peoples together with the human rights workers, practitioners or human rights defenders (HRDs) of the world.  It is constantly challenged by many States and their apparatuses, corporations and groups whose intent veers away from aspirations of people they vow to serve. 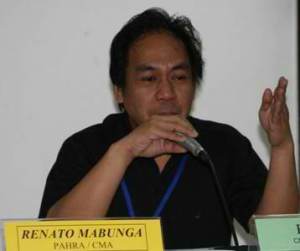 Human rights are all about dignity.  They are that which make a person human being.  Rights are basic entitlements a person possesses to become truly human.  They are the minimum expression of human dignity.

Tracing back from the Western scholars, human rights concepts are said to have evolved from the notion of Natural Law.  That, the world is governed by an invisible order which has endowed every person the concept of a perfect justice discernable by human reason; making all human kind equal in rights and dignity.  The doctrine of natural law presupposes the existence of a natural moral code based upon the identification of certain fundamental and objectively verifiable human goods.  The enjoyment of these basic goods is to be secured by our possession of equally fundamental and objectively verifiable natural rights.  Thus, the foundation of human rights, to wit:

The recognition of the inherent dignity and of the equal and inalienable rights of all members of the human family is the foundation of freedom, justice and peace in the world (UDHR, 1948; ICCPR, 1966; ICESCR, 1966).

All human beings are born free and equal in dignity and rights.  They are endowed with reason and conscience and should act towards one another in a spirit of brotherhood/sisterhood without distinction of any kind, such as race, color, sex, language, religion, political or other opinion, national or social origin, property, birth or other status.  Furthermore, no distinction shall be made based on the political, jurisdictional or international status of the country or territory to which a person belongs, whether it be independent, trust, non-self-governing or under any other limitation of sovereignty (UDHR, 1948).

Today, human rights are continued to be asserted and yet continuously violated.  Even human rights defenders whose noble desire is to facilitate the birthing of a culture of peace and respect are not spared of threats and attacks.

At the 3rd Regional Forum of Human Rights Defenders in Bangkok 2009, participants to the gathering from all over Asia discussed and came up with four common trends, which speak of the human rights condition of Asia today and the strategies by which they used human rights principles and mechanisms to approach them.

1)    Policy enactments and legislations restrict the enjoyment of rights;
2)    Increasing restrictions to the right to expression and opinion;
3)    Human rights defenders particularly women human rights defenders are increasingly targeted for who they are and for their work;
4)    National human rights institutions are threatened of their independence and effectiveness (Gil & Germanos, 2009).

There is a noted trend around Asia on reviving old draconian regulations and/or legislating repressive laws directly curtailing expressions of rights.  In Malaysia, the Police Act of 1967 is operational, prohibiting peaceful assembly of more than three people without permit.  There are “internal security acts” in Malaysia and Singapore allowing, “arbitrary detention of individuals at will of the authorities, sometimes for prolonged periods, without trial or charges proffered against them” (Anthony, 2010).  South Korea has the “1962 Act on Assembly and Demonstrations” empowering authorities to disperse peaceful assemblies considered critical of the government.  Jordan has the “Press and Publication Law” that restricts freedom of the press.  Indonesia and Timor Leste have the “Criminal Defamation Law”.  India has the “Unlawful Activities (Prevention) Amendments Act 2008 and the National Investigating Agency Act”.  There is an archaic “Lèse Majesté” law in Thailand.  Moreover, there are “anti-terror laws” in the Philippines and Sri Lanka, to name a few.

Directly affected in the implementation of the above legislations and policies are the basic rights of peoples and as such the rights of HRDs to life, freedom of expression and opinion and security.  Most often than not, sources of these rights violations are relating to political, economic, social and cultural assertion of individual and collective rights, the right to peace and the right to development by virtue of the interdependency and inter-relatedness of rights.  A case in point is the phenomenon of extra-judicial execution of activists and journalists in the Philippines and in many countries.  They are “allegedly” instigating people to rebel against governments for exposing anomalies related to land, corruption, labor disputes, environment or government’s abuse of power particularly that of police and the military.  They become more appalling as they are committed with impunity that nurtures as culture of fear among peoples. It must be noted that the right to freedom of opinion and expression includes freedom to hold opinions without interference and to seek, receive and impart information and ideas through any media and regardless of frontiers (Ban Ki-moon, 2010).  This is never the case when vested interests are at stake.

Women are particularly vulnerable to attacks in Asia.  Aside from being part of social movements, their actions challenge existing religious and social norms on the role of women in current Asian societies.  In a survey conducted by the International Campaign on Women Human Rights Defenders, women are particularly vulnerable to discrimination.  It is the main obstacle in their continued engagement particularly those belonging to marginalized groups (Real, 2008).  Restrictive use of customary laws and religion has assigned women outside of decision-making processes; otherwise, they face intimidation from family members and defamation by the community and the State.

Some National Human Rights Institutions (NHRIs) which are government’s are also at risk in Asia.  While most of them serve at the pleasure of their governments, those that subscribe to the “Paris Principles” are facing threat of their independence from the very governments that create them.   This is so jeopardizing their effectiveness and independent role as vanguards in promoting and protecting human rights and as HRDs themselves.  A case in point is the National Human Rights Commission of Korea (NHRCK), recognized for its independence and effectiveness among NHRIs in Asia and the world.  After the failed government’s attempt to place it under the direct supervision of the Office of the President in 2008, the Ministry of Public Administration and Security (MOPAS) has reduced the personnel and operations of the commission from 208 to 146 (Gil & Germanos, 2009).  Malaysia’s SUHAKAM is under the Prime Minister’s Office.  While many Asian countries are still adamant on establishing one and, those that have, are mostly devoid of transparent guidelines in the selection process of commissioners.

For the period of January to December 2010 in the Philippines alone, the Task Force Detainees of the Philippines (TFDP) has documented 80 cases of politically motivated arrest and detention involving 142 victims; 35 cases of torture involving 57 victims; 19 cases of harassment involving 8,167 victims; 9 cases of extra-judicial killing victimizing 11 persons; 3 cases of enforced disappearance involving 5 victims; and, 6 cases of illegal demolition dislocating 7,304 families all over the Philippines.  In the latest US Department of Labor Report, the Philippines is one of the countries with “worst forms of child labor” ranging from trafficking and ending up in forced domestic service and commercial sex exploitation to child soldiering (US Dept. of Labor, 2010).

All these trends have been validated and persisted in the 4th Regional Human Rights Defenders Forum in Manila last December 2010: human rights violations continue to rise and human rights defenders are all the more at risk in the conduct of their work.

Human rights defenders are those who document and expose human rights violations; those that seek for remedies for victims; those that hold perpetrators and governments accountable.  They are those who help in combating abuses; arresting further violations through education, policy recommendations, service provision, information and campaigns.  They can be anyone working to promote and protect human rights, including lawyers, victims and their relatives, teachers, trade unionists, journalists, members of peoples’ organizations, women, farmers and other human rights activists (Protecting Human Rights Defenders, n. d.).

Their noble desire to promote the well-being of all has prompted the United Nations (UN to pass Resolution A/RES/53/144 otherwise known as the “Declaration on the Rights and Responsibilities of Individuals, Groups and Organs of Society to Promote and Protect Universally Recognized Human Rights and Fundamental Freedoms” or the “Declaration on Human Rights Defenders” in 1998.  It recognizes the importance and legitimacy of the works of those who are in the front lines of defending human rights.  It acknowledges the vital role of HRDs in the implementation of human rights particularly on the domestic level (Protecting Human Rights Defenders, n. d.).

“It is precisely because of their critical role in promoting human rights awareness and debate on the national and international level that many HRDs find their own rights flagrantly violated by repressive governments in forms of threats to their lives, intimidation and harassment, arbitrary arrest and detention, disappearances, torture, extra-judicial executions and other physical violence” (Protecting Human Rights Defenders, n. d.).   For that matter, curtail the rights and responsibilities of human rights defenders, to wit: (UN Declaration on Human Rights Defenders, 1998)

These are the realities of human rights work and human rights defenders in the Philippines.  With these realities, is an overlooked notion of HRDs needing as much protection as the victims they serve.  They tend to forget that by helping victims they become easy targets of retaliation.  They tend to downplay that their security is as important as the security of the victims under their care.  It is therefore urgent to come up with mechanism to safeguard their lives and integrity thereby re-orienting human rights work in the Philippines to include the defense and protection of human rights defenders.