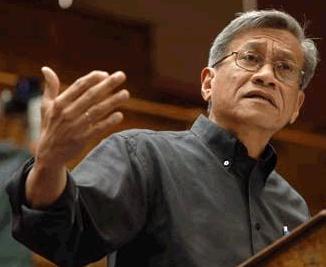 At the wake of former National Bureau of Investigation “counter-terrorism” chief Raul Manguerra, Secretary of Justice Menardo Guevarra said that he regretted Manguerra’s demise because “the implementation of the Anti-Terrorism Law is about to enter a critical phase.”

The priorities of the Duterte administration could not be clearer. Even as it has shown tremendous incompetence in managing the country’s recovery from the recent devastating typhoons and in containing the spread of COVID-19, it has displayed great efficiency in its assault on democratic rights. Its skewed priorities show an uncanny resemblance to those of Duterte’s soul brother, Donald Trump, who has all but forgotten his responsibility for containing the rampaging pandemic in the US, focusing and obsessing instead with overturning the results of the recent fair, democratic elections.

It was perhaps not coincidental that 7 people, including a media personality and 6 union organizers, were arrested on December 10, Human Rights Day, since Duterte is known to revel in blatantly expressing his contempt for human rights. The arrests coincided with the killing by government agents of two individuals tagged as “NPA leaders” in Surigao del Sur, and came after earlier fatal shootings and arrests of other suspected “CPP-NPA terrorists.”

Duterte himself has taken a starring role in the current “red-tagging” campaign spearheaded by the military. At a recent press briefing, he engaged in his specialty, making scurrilous remarks, by comparing the left-wing Makabayan Bloc Representative Carlos Zarate to “dog shit.” His headline-grabbing attacks represent a 180 degree turn for a man, who, early in his presidency, appointed people associated with the bloc to cabinet positions. Meanwhile, his minions in Congress have behaved in classic attack dog fashion: Senate President Tito Sotto III, for instance, converted a Senate hearing into a courtroom when he exhibited prosecutorial zeal in an unsuccessful effort to get former Congressman Teddy Casiño to admit that several progressive civil society organizations are “recruiting grounds for the CPP-NPA.”

Not surprisingly, Duterte and Sotto’s rhetorical offensive has been accompanied by an online campaign to get the House of Representatives to throw out Makabayan Bloc representatives as “enemies of the state.” Over the last few years, Malacañang’s online propaganda machine, funded with hundreds of millions of taxpayers’ money, has become a formidable social media force in a country where 96% of the population have access to Facebook.

The Communist Party and the New People’s Army constitute a remote threat to the government. However, the Duterte administration and the military consider them convenient targets at this point since years and years of anti-communist socialization have demonized them. Duterte and the military’s intention is to make persecution of the CPP-NPA — and figures and organizations that have been indiscriminately and, without proof, identified with them — an object lesson for the broad opposition.

Indeed, at the same time that the military and police were killing and arresting left-wing activists, the civilian arm of the regime brought a second charge of cyber libel against Maria Ressa, CEO of Rappler, apparently sadistically timing her arrest so that she would not be able to post bail and be forced to spend the night in jail. (Fortunately, she posted bail shortly before the deadline.) Also around the same period, Youtube videos portraying Manila Mayor “Isko” Moreno as an “NDF consultant” suddenly popped up after he ordered posters “unwelcoming” the CPP-NDF in Manila taken down because he did not want to “sow hatred” in his city.

The anti-Moreno videos, which also pandered to anti-LGBTQ prejudices by calling the mayor a “barbie,” are interesting since they appear to serve a dual purpose: to frighten Moreno from making statements and moves in support of democratic rights, and to preemptively sink his candidacy for president in the coming 2022 elections and thus remove him as a threat to the president’s anointed successor, his daughter Sara Duterte. There could be no more blatant a display of how Duterte’s authoritarian agenda has meshed with his dynastic aims.

The message from the administration is loud and clear: criticize and oppose us and you will be at the receiving end of our weapons, both violent and “legal.”

Duterte and his gang have made only one fatal miscalculation: people who truly value democratic rights will not buckle down, and, as shown during the Marcos martial law period, their resistance will only grow. The president and the military are engaged in a self-defeating campaign. But then, that’s a lesson despots never learn.

The article was also posted at Rappler.com