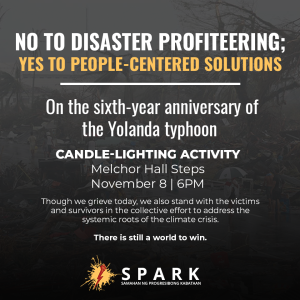 Six years ago, typhoon Yolanda made landfall in the country and devastated regions in Southern Luzon and the whole Visayas. Nearly a million shelters were destroyed, displacing more than 4 million families, and severely affecting more than 13 million people. About 6,000 individuals lost their lives, and up to a thousand are still missing.

Despite these casualties, Filipinos’ lives continue to be threatened by climate disasters. Little has changed to address the systemic roots of the climate crisis, and little has changed regarding how post-disaster rehabilitation and reconstruction is handled in the Philippines.

The main causes of the climate crisis have not been addressed – rampant neoliberal policies and unbridled exploitation of the environment in pursuit of profit. Worse, the government and the private sector have even worked together to hijack post-disaster rehabilitation policy and favor the profiteering schemes of big businesses. They have displaced the interests of the survivors in exchange for economic gains for themselves.

During the post-disaster rehabilitation process, funds for the government-initiated Reconstruction Assistance for Yolanda (RAY) were mostly expended on contracts with huge corporations, instead of being allocated for funding roads, bridges, public buildings, and other public projects. Three years after Yolanda, it was even reported that nearly 200,000 victims did not receive the emergency shelter assistance allocated for them.

Prevailing government inaction and marginalization sparked the local residents into action. Workers, farmers, and communities from the Eastern Visayas organized to demand basic services and human rights from LGUs and the national government. Farmers mobilized to reclaim croplands, and communities came together to pool resources, supplies, and to build typhoon-resistant shelters to serve as community halls.

The people of Eastern Visayas exhibited the power that the masses wield when united.

As economist and philosopher, Rosa Luxemburg famously said: “Bourgeois society stands at a crossroad, either transition to socialism or regression into barbarism.” In this time of climate crisis, these words ring ever true as the global climate strike movement rages on in hopes of building a better world that isn’t founded on profit and exploitation of people and the environment. An only radical systemic change towards a world transcending capitalism can ensure our survival from the current climate crisis.

We must continue to fight for a better world. A world where disasters are not made into profit opportunities for the economic elite. A world where the rights of the basic sectors of workers, farmers, indigenous peoples, and others are upheld and advanced. A world free from the rotting systems of neoliberalism and capitalism.

Filipino resiliency can only take us so far: it’s time for those in power to face the vulnerable realities of the people on the ground. As such, we enjoin all youth to commemorate the sixth anniversary of the typhoon Yolanda with SPARK and other groups inside UP Diliman.

Though we grieve today, we also stand with the victims and survivors in the collective effort to address the systemic roots of the climate crisis.