[Appeal] Appeal to Congress (House of Representatives and Senate): DEMAND FOR THE INCLUSION OF IP RIGHTS IN THE BBL -Loyukan

Posted on May 29, 2018 by Human Rights Online Philippines Leave a comment

Appeal to Congress (House of Representatives and Senate): DEMAND FOR THE INCLUSION OF IP RIGHTS IN THE BBL 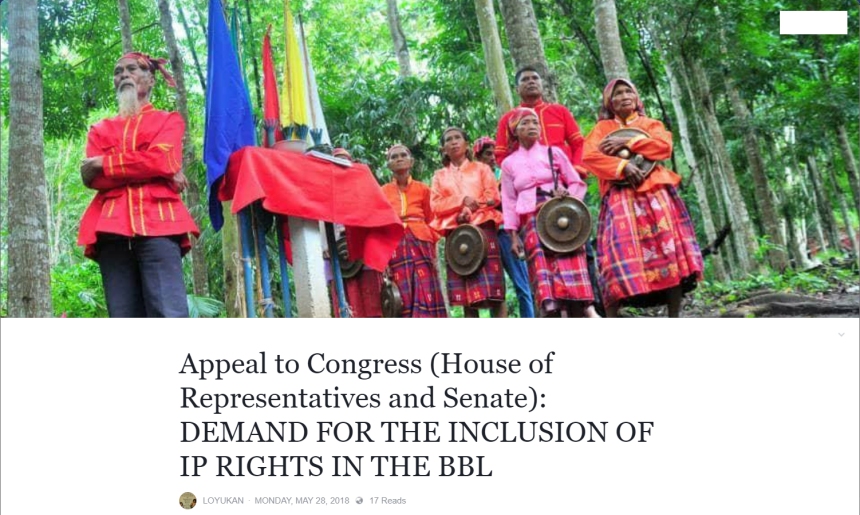 The Késéfangguwit Timuay or Timuay Justice and Governance (TJG) is an Indigenous Political Structure (IPS) of the Téduray and Lambangian in the core area of the propose Bangsamoro political entity with a population of not less than one hundred twenty-seven thousand two-hundred sixty-eight (127,268) as of 2013 IPDev Census. They are in eighty-four (84) barangays in three (3) full municipalities and portions of eight (8) other municipalities in the first and second districts of Maguindanao province. We operate base on the Indigenous Peoples Rights Act (IPRA) and the United Nations Declaration on the Rights of Indigenous Peoples (UNDRIP).

We the Non-Moro IPs are directly affected in the armed conflicts in mainland ARMM and in the quest for a genuine peace and development in Mindanao, we also spent time, resources and efforts to have our own TRUTH be heard in the peace processes and in the drafting of the BBL. Sadly, in the present version of the BBL adopted by the House of Representatives and Senate for Plenary are short of our proposals submitted to the BTC and during the public hearings called for by Congress (HoR and Senate) in early 2018.

Today, we appeal to all of you (members of the House of Representatives and Senate) to look at our Non-Negotiable provisions for consideration. These provisions are included in the Loyukan Briefer for wider circulation, and included here as follows:

IDENTITY
Article II Sec 2. The freedom of choice of all indigenous peoples within the Bangsamoro territory to retain their distinct indigenous and ethnic identity in addition to their Bangsamoro political identity shall be respected. There shall be no discrimination on the basis of identity, religion, and ethnicity.

FPIC IN CONTIGUOUS TERRITORY
Article III, Sec. Contiguous provinces, cities, municipalities, barangay, and other geographical areas other than those mentioned in the preceding Section, that obtain majority of the qualified votes cast in the periodic plebiscites, as provided under Article XV, Section 4 of this Basic Law shall become part of the Bangsamoro; Provided, that the inclusion of the ancestral domains in the Bangsamoro shall be subject to the free, prior, and informed consent of the affected community.

RIGHTS OF INDIGENOUS PEOPLES OVER NATURAL RESOURCES
Article XIII, Sec. 12. The Bangsamoro Parliament shall enact a law recognizing the rights of indigenous peoples in the Bangsamoro in relation to natural resources within the territories covered by a native title, including their share in revenues, as provided in this Basic Law, and priority rights in the exploration, development and utilization of such natural resources within their area. Exploration, development, and utilization of natural resources, including but not limited to fossil fuels and uranium, mines and minerals, and renewable energy, within ancestral domains shall be subject to FPIC.

REPEALING CLAUSE
Article XVIII, Sec. 2. Provided that such laws, decrees, orders, rules and regulations, and other issuances and parts thereof, shall not be inconsistent with the Constitution, and shall not fall below the minimum standards contained in national laws and relevant international instruments.

Finally, please find attached the Loyukan Briefing paper for details of all the processes we underwent to raise these issues and concerns to concerned offices.