TFDP calls for Filipinos to oppose violent policies of the Government, resist dictatorship! 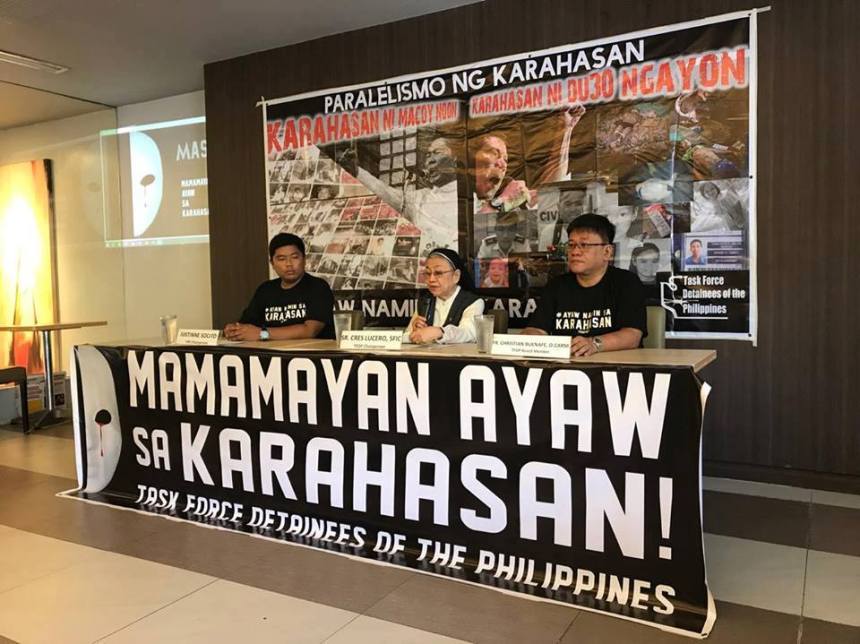 Rights group calls for the Filipino people to oppose President Rodrigo Duterte’s violent policies and resist dictatorship in a press conference in Quezon City on September 19, 2017.

In line with the 45th commemoration of the declaration of Martial Law, Task Force Detainees of the Philippines (TFDP) launches its campaign dubbed as “Mamamayan Ayaw Sa Karahasan (MASK)” (People against violent policies).

“We are deeply concerned that as we remember the Martial Law atrocities in its 45th Anniversary, we now have a President who repeatedly expressed his obsession with declaring Martial Law under his term. We are saddened that we are again under an administration with violent policies and tyrannical ways of leadership,” she added.

TFDP was established in 1974 by the Association of Major Religious Superiors in the Philippines (AMRSP) amidst the blatant violations of human rights during Marcos’ reign.

“Forty-five years after, human rights of the Filipino people are continuously violated. Now the situation is getting worse,” Fr. Christian Buenafe, O.Carm, TFDP Board member lamented.

Fr. Buenafe presented to the media the Deklarasyon ng Mamamayan Ayaw Sa Karahasan, “We, the Filipino people who are against the violent policies of the government will encourage our fellow Filipinos to resist the pervading culture of violence that contradicts our dream for a God fearing, peaceful, civilized and humane society.”

As a symbol of protest, the group wore masks with tears of blood and encouraged the public to join them in the campaign to resist all forms of state violence.###