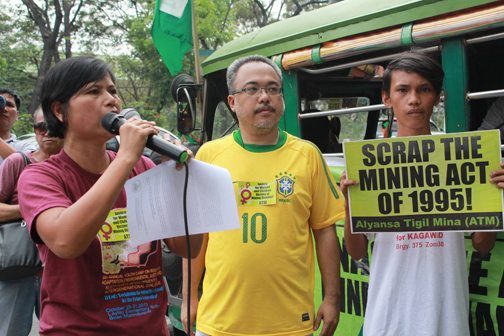 Led by the Alyansa Tigil Mina (ATM), groups called on the government to step up and lead the people in demanding justice for victims of the Marcopper toxic mine tragedy and other mining disasters.

This morning, the groups went agency-hopping in a caravan from Bantayog ng mga Bayani to the Mines and Geosciences Bureau (MGB), then to the Department of Environment and Natural Resources Office (DENR), and concluded in front of the House of Representatives (HOR).

At the DENR, the group with the Marinduque Council for Environmental Concerns (MACEC) submitted a petition for the agency not to allow the acceptance of the Nevada settlement offer related to cases filed after the Marcopper toxic mine disaster in March 24, 1996. The case up to now is yet to be resolved.

The group demanded that the DENR must not sign the waiver to pave way for the Marcopper Settlement.

In its endorsement letter, ATM said that the government should not allow the settlement to push through, because if accepted, Marcopper, Placer Dome and Barrick Gold will only leave “the burden to rehabilitate and ensure the recovery of the damaged areas to the government and communities.”

MACEC added that government should not let this settlement erase the responsibility of the mining companies to rehabilitate Marinduque and compensate the people affected by the tragedy.

At the HOR, the groups reiterated that the Mining Act of 1995 (Republic Act No. 7942) is a flawed policy in many ways—and that its disastrous impacts has only benefited a number of foreign and local mining firms at the expense of many Filipino communities.

ATM national coordinator Jaybee Garganera said: “19 years and the Mining Law continue to fail us. It is about time that we scrap this law and enact a new bill that will ensure that mining companies, such as Marcopper can and will be held responsible and accountable for the effects of their mines.”

The group also called for the rehabilitation of many abandoned mine areas that today stand at around 800 closed down mines.

Alyansa Tigil Mina is an alliance of mining-affected communities and their support groups of NGOs/POs and other civil society organizations who oppose the aggressive promotion of large-scale mining in the Philippines. The alliance is currently pushing for a moratorium on mining, revocation of EO 270-A, repeal of the Mining Act of 1995, and passage of the AMMB.