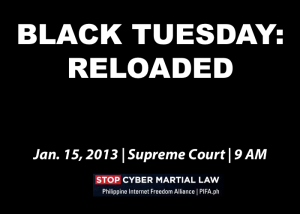 The Philippine Internet Freedom Alliance (PIFA), made up of different organizations, netizens, and bloggers, held its first protest this year as it continues to fight for freedom of expression and against the Cybercrime Law.

The group revived its silent protest, the third since the passage of the said bill last year.

“This is our third Tuesday of silence. The Supreme Court must decide before everyone is unjustly silenced everyday.” Kenneth Keng, PIFA Spokesperson, said.

PIFA is the 15th petitioner against the Cybercrime Prevention Act or RA 10175. The grounds for the petition included: the law as a violation of the right to privacy, as a violation to equal protection, and as a violation to free speech. Individuals and organizations part of PIFA were the signatories of the said petition.

An online black-out also continues as support of the protest. People have once again changed their profile photos into black. Both the online and offline protests serve PIFA’s battle-cry, “Stop Cyber Martial Law!”

“The TRO given by the Supreme Court does not stop Cyber Martial Law, it has only been put into a pause. This means that losing our freedom of expression is just looming around the corner.” Ayeen Karunungan, also a spokesperson of PIFA, said.
PIFA calls for the repeal of the law. “The Cybercrime Law does not answer the problems we are facing in the Internet. We call for the repeal of the law and to craft a new one that will truly serve its purpose,” PIFA spokesperson, Red Tani, added.

PIFA is a broad alliance of organizations and individuals who stand together to protect our basic rights to liberty and dignity – including the right to privacy, and freedom of expression, speech, sexuality, and mobility – on the Internet and who opposes RA 10175 which contains provisions that are oppressive, susceptible to abuse, and against the fundamental liberties guaranteed by the Constitution. It is an open alliance and anyone who share the same advocacy may join.