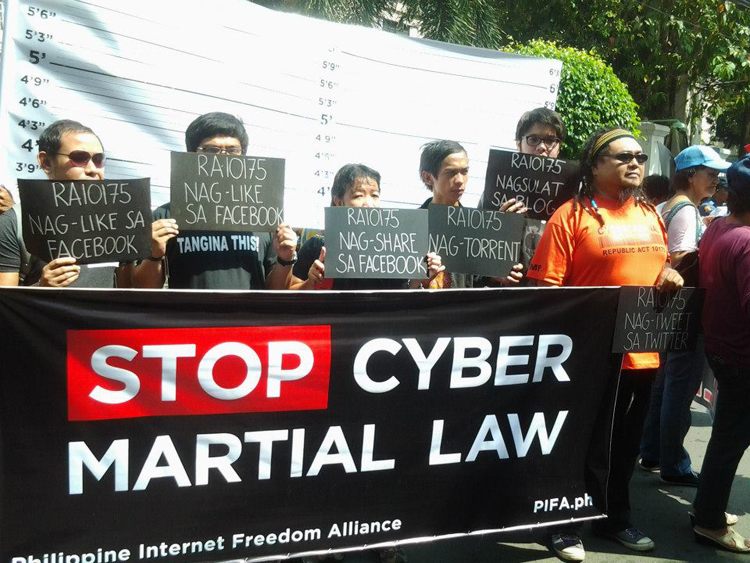 The Philippine Internet Freedom Alliance (PIFA), made up of different organizations, netizens, and bloggers, occupied Padre Faura for the second time on Tuesday to uphold freedom of expression and pressure the Supreme Court to issue a temporary restraining order on the Cybercrime Prevention Act.

“If the government does nothing wrong then it has nothing to fear from freedom of speech,” Kenneth Keng, PIFA Spokesperson, said.

PIFA also submitted a petition for TRO yesterday, October 8. The grounds for the petition included: the law as a violation of the right to privacy, as a violation to equal protection, and as a violation to free speech. Individuals and organizations part of PIFA were the signatories of the said petition.

An online black-out also continues as support of the protest. Access, a global movement for digital freedom, has supported the cause and helped PIFA’s campaign go on an International level. “With broad and unjust cybercrime laws being enacted around the world, we need to fight them one by one. That’s why it’s critical that the international community stands together on Black Tuesday,” Access said on their website petition to Stop Cyber Martial Law. They have also blackened out their site.

“The threat to Internet freedom is not just an issue of the Philippines. There have been many threats to it worldwide, such as the SOPA and PIPA. What is important is that we stand up for our rights. If the world condemned SOPA and PIPA, the world will rally behind us in this fight against Cyber Martial Law,” Ayeen Karunungan, also a spokesperson of PIFA, said.

PIFA is a broad alliance of organizations and individuals who stand together to protect our basic rights to liberty and dignity – including the right to privacy, and freedom of expression, speech, sexuality, and mobility – on the Internet and who opposes RA 10175 which contains provisions that are oppressive, susceptible to abuse, and against the fundamental liberties guaranteed by the Constitution. It is an open alliance and anyone who share the same advocacy may join.