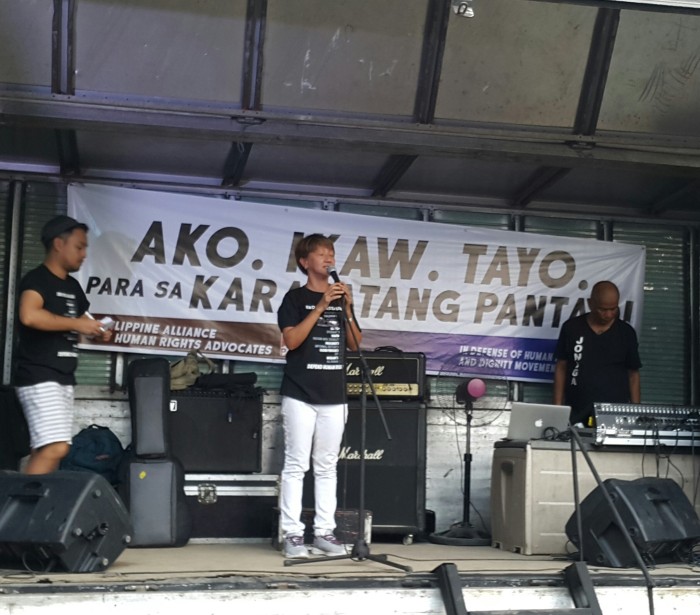 December 10th is the 71st commemoration of International Human Rights Day. This year focuses on young human rights defenders all over the world, and the challenge of shrinking civic spaces in the Philippines.

The past couple of years marked an extraordinary rise of young people’s movements which call out injustice, corporate greed, violence and inequality. From climate and land issues to discrimination and disinformation, labor contractualization and extra-judicial killings, the youth’s boundless energy gave us inspiration to fight for a better world. The next generation of human rights defenders are front and center in the defense of our environment, sovereignty, economic sustainability, food security, gender equality, climate justice, speaking truth to power.

For a ruling despot, the swelling discontent and the resolute action of young people who are not cowered, are a direct threat to his designs for power. He will thus use his authority to quell this tide.

Since 2018 government has enacted numerous executive issuance, amendments to laws, and policy directives to systematically diminish the spaces and opportunities for political action. Touted as anti-insurgency measures, these actually target critical voices and undermine people’s participation in public governance.

Memorandum Order 32, which increased the deployment and authority of the police and military in the provinces of Samar, Negros and Bicol provinces; Republic Act 10973 which gave subpoena powers to the Chief of Police and Deputy CIDG Director and removed the exclusive subpoena jurisdiction from the Courts; the Anti-Terrorism Act of 2019 amended the Human Security Act, removing its sanctions for illegal arrests; Executive Order 70 instituted a whole of nation approach against insurgency; DILG Memorandum 2019-116 subjecting all civil society groups and peoples’ organizations to surveillance, and its guidelines for the implementation of E.O. 70 which requires Barangays to report on NGOs investigating human rights violations.

On top of existing laws such as cyber libel, the Philippine Identification System (R.A.11055), as well as the ongoing State of National Emergency on Account of Lawless Violence (Proclamation 55) and martial law (Proclamation 216), more proposals are in the pipeline such as draft bills to amend the anti-wiretapping law (R.A.4200), reintroduction of the death penalty, lowering the minimum age of criminal responsibility, and a foreign electronic surveillance act.

Implementing the above legislation and policy measures weakens our people’s ability to think freely and act responsibly to solve the problems in our society, due to fear of retribution or violence. Shrinking civic spaces debilitates the capacity of the youth to forge a better future for themselves and their children, due to the punitive response by authorities that punish, rather than reward, critical thinking.

In Defense of Human Rights and Dignity Movement (iDEFEND) and the Philippine Alliance of Human Rights Advocates (PAHRA) stand for the strengthening of democracy and human rights against any threat to society, including authoritarian rule. We reiterate the importance of broadening civic spaces, for people’s solidarity, action and real change. We link arms with today’s youth towards achieving a life of dignity for all, right here, right now. We all stand for human rights.