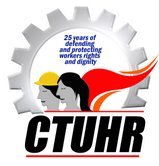 Several lawyers, artists, Church people, members of the academe and labor rights advocates launched the Labor Rights Defender Network (LaRD-Net) on October 9, 2019. The formation of this new network is a response to the growing need to consolidate the ranks of labor rights defenders in support of workers in the midst of continuing violation of workers’ rights and an alarming state of repression and violence. The network aims to conduct campaigns and activities to support the workers just calls for decent wages and dignified work.

“Just like how ordinary Filipinos showed the bayanihan spirit to help the farmers who lost their livelihood because of the Rice Tarrification Law, we would also like to extend our help to another basic sector in our society – the workers. Aside from low wages and inhumane working conditions at work, the workers are completely being stripped off their dignity as they are faced with violence as they fight for their legitimate rights,” said Atty. Fudge Tajar, spokesperson of the network.

Recently, the Philippines has once again been tagged by the International Trade Union Confederation (ITUC) as one of the World’s Worst Countries for Workers in terms of job security, safety at work and freedom of association. The state of workers’ rights in the country is very alarming. Even the International Labor Organization (ILO) has expressed concern about the growing repression and violence being experienced by workers in the Philippines. In fact, they have called on the PH government to accept an ILO High-Level Mission that will look into the various reports of trade union and human rights violations, especially the alarming number of killings of workers and labor rights advocates under the Duterte government, which has reached 43.

Atty. Tajar also noted that the current crises – food, economic and even the transportation crisis are pushing the workers to their limits and magnifies the need for the workers to stand up for their rights. “As the clamor of the workers grows, the response they get is different forms of repression and harassment. The past three (3) years have been filled with reports of violent strike dispersals, red-tagging of unionists, illegal arrests of labor rights advocates and other attacks on workers’ rights,” Tajar added.

“At a time like this, when the government is inutile and insensitive to the needs of the people, we have to step up to help them, both by engaging in campaign initiatives in support of their calls on the government and business owners for accountability and also by conducting activities that would support their needs such as free legal aid, donation drives for striking workers and families, jail visits to imprisoned unionists, dialogues, etc. We are calling on professionals, lawyers, patriotic business owners, and labor rights advocate to join this network. Let’s make use of our knowledge and abilities to support and uplift the workers’ conditions. Together, let us make this government and their capitalist friends whom they serve, accountable to the workers and the people, ” Tajar ended.###