Statement from Human Rights Watch on Duterte’s release of “narco list” of politicians:

President Duterte’s naming of politicians he accuses of involvement in illegal drugs is an outrageous attempt to influence local elections in May. More critically, it’s a veritable hit list in his “drug war,” as past politicians accused of drug involvement all too often end up being shot dead by the police. Duterte’s list deprives those named of due process and the presumption of innocence. If the government really has evidence against them, they should be arrested, charged and tried, not be the target of administrative cases by an agency – the interior department – that is under the office of the president. This weaponizing of the “drug war” against politicians further undermines the rule of law, democracy and civil liberties in the Philippines. 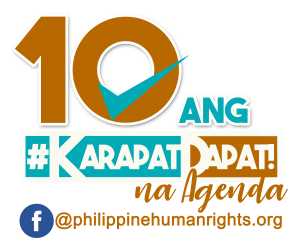