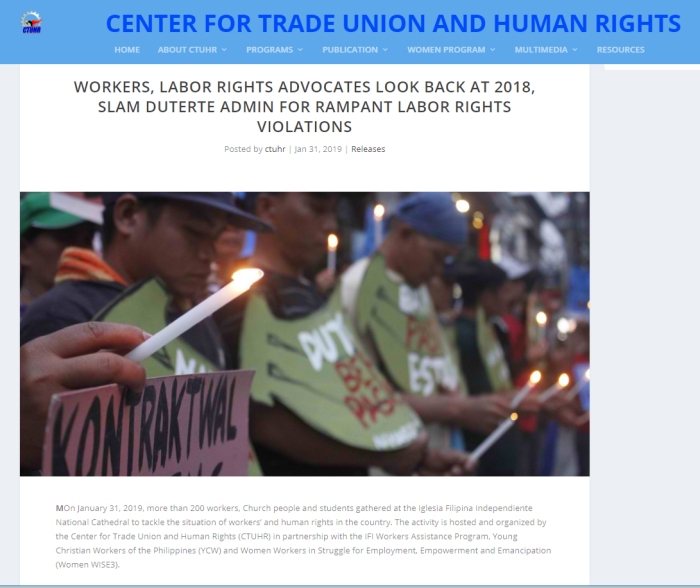 On January 31, 2019, more than 200 workers, Church people and students gathered at the Iglesia Filipina Independiente National Cathedral to tackle the situation of workers’ and human rights in the country. The activity is hosted and organized by the Center for Trade Union and Human Rights (CTUHR) in partnership with the IFI Workers Assistance Program, Young Christian Workers of the Philippines (YCW) and Women Workers in Struggle for Employment, Empowerment and Emancipation (Women WISE3).

CTUHR shared its Year-End Report on the Situation of Trade Union and Human Rights. Meanwhile, Makabayan Coalition’s senatoriable, Atty. Neri Colmenares also graced the event and tackled significant updates on the current political situation and prospects for the Filipino workers, especially with the upcoming midterm elections.

2018 has been an eventful year for the workers- as jobs remained unstable, wages barely enough to survive amid the rising costs and workers’ rights continue to be violated. The Duterte administration proved to be anti-worker and anti-poor as it totally turned its back on its promise to end contractualization (even with its Executive Order 51) and responded to workers’ strikes and protests with harassment, violence and other forms of repression.

It also noted 109 cases of Civil and Political Rights violations, affecting more than 7,000 workers. The Center also highlighted the alarming extent of violations in terms of the right to freedom of association and collective bargaining. In the midst of a growing clamor for change among workers, almost 16,000 workers experienced different forms of violations on their right to organize.

Meanwhile, in line with Duterte’s crackdown against his critics, labor leaders and labor rights advocates Rafael Baylosis, Adelberto Silva, Marklen Maga, Juan Alexander Reyes, Ireneo Atadero, Julio Lusania, Oliver and Weng Rosales were arrested and charged with trumped-up cases. Rafael Baylosis was freed early this month because the cases against him were dismissed due to lack of sufficient evidence.

The workers of Japanese multinational banana company Sumifru Philippines Corporation were also present in the activity and gave their testimonies. They have been on strike since October because of the company’s refusal to recognize their union and engage in collective bargaining for 10 years. They also shared their experiences in Compostela Valley where they were continuously harassed and tagged as rebels by elements of the 66thInfantry Battalion. One of the unionists, Danny Boy Bautista, was killed last October.

The activity concluded with a short protest action along Taft, Avenue to call for the long-standing demands of workers for P750 National Minimum Wage, decent and stable jobs, safe working conditions and recognition of right to organize and freedom of association. The call for justice for all victims of Duterte’s fascist attacks against workers also reverberated, as they lit some candles along Taft, Avenue.