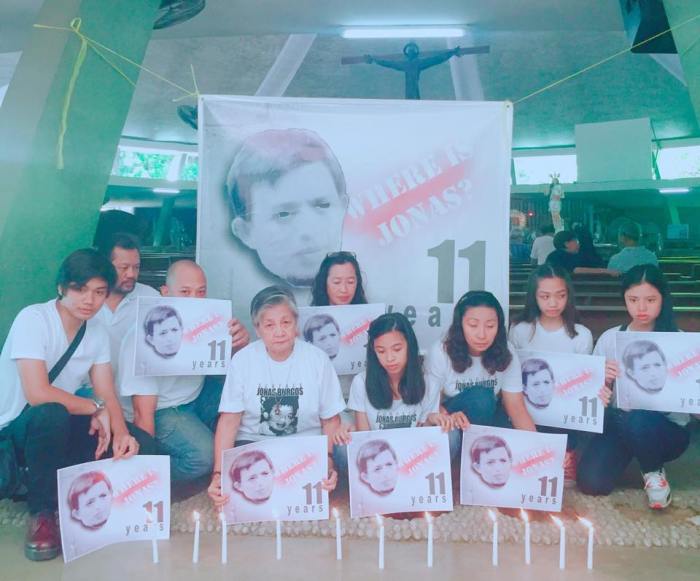 The Supreme Court affirming the March 27, 2013 resolution of the Court of Appeals ruled that the Philippine Army of the Armed Forces of the Philippines took Jonas Joseph Burgos on April 28, 2007, establishing that Jonas is a victim of enforced disappearance. He was alone, unarmed and having his lunch when Maj. Harry Baliaga Jr. along with 3 men and a woman, dragged him out of the Hapag Kainan Restaurant of the Ever Gotesco Mall in Quezon City, according to the same document of the Supreme Court. An order by the Court for the military to produce Jonas was not complied with and to this day, nobody has been cited in contempt.

Eleven years after the abduction Jonas remains to be missing. The truth about his enforced disappearance authored by the military remains to be a mystery. Justice has been denied. Meanwhile the suspects in the case, all military officers, have been promoted, granted choice positions in government and the military hierarchy and enjoy the perks that go with their positions. It is not a surprise to read news stories that report that some of the suspected abductors are now assigned in areas where there are many cases of enforced disappearances.

For eleven years Jonas’ family endured the consequences of a missing breadwinner, protector, brother, son. No relief is in sight… for now.

Unless and until the authorities realize that the only way to earn the complete confidence of the people in government sincerity, to completely implement the law, the first step of which is to clean the ranks of the military and weed out the undesirables.

The case of Jonas is a clear example of why impunity and tyranny continue to afflict our society. The evidence established the guilt of the accused, and the court ruled accordingly … the case was won, but the battle was lost. Those accountable were not made to pay. Jonas has not been returned to his family.

For eleven years, family and friends tried all peaceful avenues purportedly available in a democratic society.

There has been no dearth in fidelity, nor of persistence and tenacity among members of the family, nor has there been any shortage of generous hearts and souls, volunteers and pro bono services in all the arcs and bends, man-made ruts and pits and heaps and mounds of the sometimes agonizing, sometimes dangerous path of the search for Jonas. At every turn, family and friends were constantly accompanied by prayers, so much so that the phrase ‘God’s providence’ was so genuinely felt. When someone in the family would falter, a Simon of Cyrene and a Veronica are sent our way.

So what else is left? ‘Missing eleven years’ is unacceptable. We pray that the Lord would soften the hearts of the perpetrators… prick the consciences of those ‘who know’ and enlighten the minds of the executioners of the law.

Return Jonas as ordered by the Supreme Court! Punish the guilty!