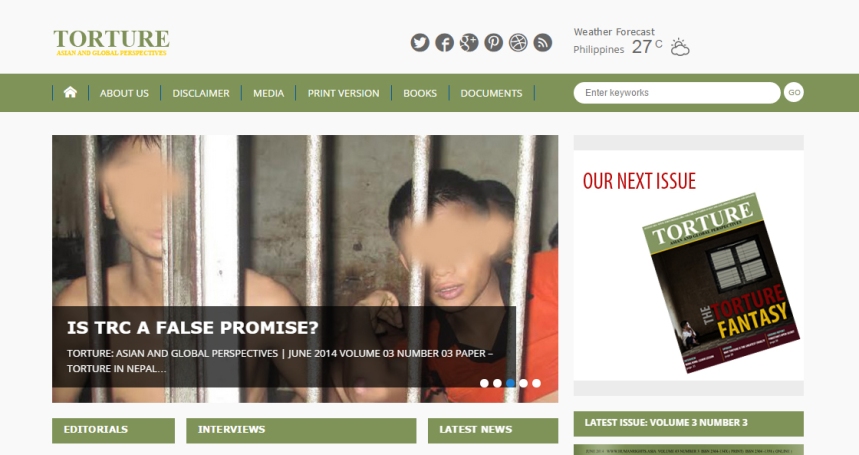 Torture: Asian and Global Perspectives a path breaking initiative in the discourse of torture prevention wishes to inform our readers of the launching of its new website. The website www.torturemag.org is not only for the print version of the magazine but it is a part of the expanding discourse that we have with our contributors and readers. This is partly due to the limitation we faced with the print version.

The bi-monthly started in 2012, published by the Asian Human Rights Commission (AHRC) and the Danish Institute Against Torture (DIGNITY), and at first it was limited to the print and downloadable PDF version of each issue. However, in the new website the readers can download, not only the PDF version of the entire issue, but also to read the individual content of each issue such as articles, Op-Ed, essays, papers, etc.

The decision to create a separated website arose after concerns from the writers and readers and it was decided to expand the space for those who, are not only engaged in the discourse but, also those who victims of this inhuman practice on a daily basis.

The website, will be updated weekly and it will not limited to the content we print bi-monthly but also news, opinion and etc. related to the subjects we cover.

As we stated in the editorial of our first issue, two years ago:

“The concept of publishing a bi-monthly magazine on torture was borne of these circumstances, limitations and hopes. The publication will give prominent coverage to the atrocities committed by authorities and affiliated agencies against individuals legally under their protection. We seek to create a platform for the discussion and exposure of torture practices in Asia and around the globe.”

“Our stance is firmly against any form of torture, a practice legally and morally reprehensible, and unjustifiable under all circumstances. We call for governments to investigate thoroughly and prosecute perpetrators of such brutality. We also invite our readers to participate in this campaign against torture. The global citizenry continue to hope (and should demand) that their governments, guided by the fundamental principles in the Universal Declaration of Human Rights and other international conventions, take legislative, administrative and judicial action so that not only will justice be served, but a lasting peace will be brought to humanity.”

Eradicating torture is a gradual but necessary process that we all bear responsibility for. Please support us by subscribing to the print magazine so we may broaden our readership in Asia and around the world, galvanise governments and aid advocacy groups.

Your help is critical for the circulation of a thing we, and the multitudes around the world, cherish and which cannot easily be vanquished: hope. Let us remain steadfast in that hope we profess, of a world without violence, and a future free from fear.

Visit our new website at www.torturemag.org , and share with your networks. Join us, and ask your friends to join eradicate this viciousness practice of mankind.
About AHRC: The Asian Human Rights Commission is a regional non-governmental organisation that monitors human rights in Asia, documents violations and advocates for justice and institutional reform to ensure the protection and promotion of these rights. The Hong Kong-based group was founded in 1984.
Read this News online
Visit our new website with more features at http://www.humanrights.asia.

FOR IMMEDIATE RELEASE
AHRC-ANM-045-2014
October 20, 2014
An Announcement from the Asian Human Rights Commission