Twenty country members of the United Nations Human Rights Council, representing a population of 3.8 billion people, vote in favour of a historic resolution to build a binding treaty. 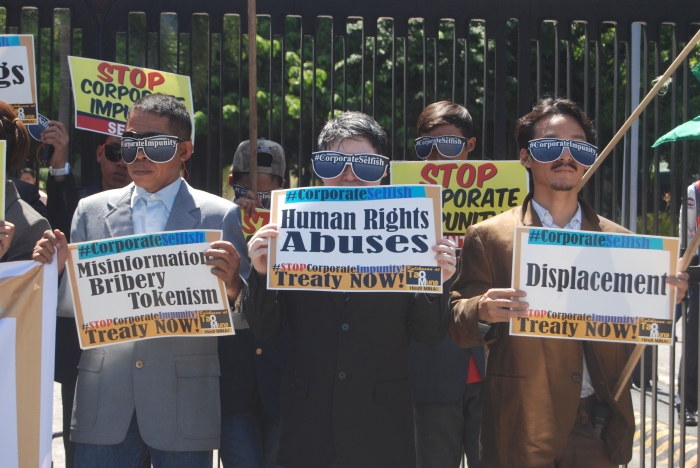 June 26th, 2014, Geneva – After weeks of negotiation and furious lobbying from Northern countries to avoid the creation of an intergovernmental working group to discuss binding human rights obligations for Transnational Corporations, the United Nations Human Rights Council voted on a resolution to initiate this process. The tense debate surrounding the resolution that was introduced in September 2013 with by 85 countries mostly from the African group, the Arab group and Alba countries, came to an end today with 20 votes in favour, 14 against and 13 abstentions.

When the resolution was presented on Thursday morning, Ecuador, China, South Africa and India passionately called for it to move forward and create a binding treaty that could provide access to justice for the victims of human rights violations by Transnational Corporations.

Despite the strong and expressed opposition from the United States, who called for the vote, and from the EU, Japan and the UK, who strongly encouraged other Council members to oppose the resolution, it passed and was welcomed by a spontaneous applause from the floor, anunconventional and rare sign at UN meetings.

After observing the vote from the floor of the Palais de Nations in Geneva Brazilian activist
Diana Aguiar said that “arguments based on threats from the EU mission that binding rules would impact investments by TNCs in countries of the South and from the US representative that corporations should be included in any discussion on business and human rights are an expression of the institutional politics that do not differentiate the public good from the defense of private interest.” She added that “the Northern States’ multi-stakeholder approach is a disguise for deep corporate capture of governments that puts investor interest above the rights of people.”

Before the vote, both Ecuador and South Africa emphasized the unprecedented support of
hundreds of civil society organizations and social movements for the resolution. In the words of the Ecuadorean Ambassador, “we have to thank the more than 500 civil society organizations that formed a coalition to demand remedies for victims and to support our effort” adding that “without their work none of this would have been possible.” The Global Campaign to Dismantle Corporate Power has been engaged in this process since September 2013 when Ecuador first announced its initiative to push for binding codes.

“One of the main demands of the Global Campaign to Campaign to Dismantle Corporate Power has been to build a binding treaty that would provide victims of systematic violations
committed by TNCs with access to justice,” said Brid Brennan of the Transnational Institute.

“We welcome the adoption of this resolution and we are committed to ensuring that the
process within the UNHRC will lead to a framework for human rights based on social and
environmental justice. The vote split between northern and southern countries shows who is willing to defend the interests of transnational capital and who defends the rights of the victims of human rights violations.”\

For more information or to arrange an interview, please contact:
Richard Girard: richard@polarisinstitute.org +41 (0) 779127121