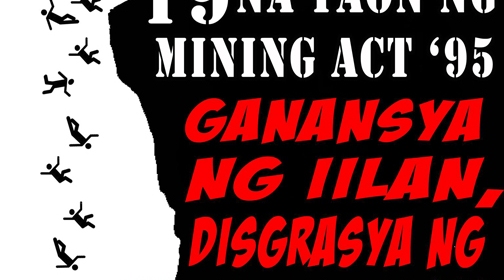 The Alyansa Tigil Mina (ATM) called on the Department of Environment and Natural Resources (DENR) Mines and Geosciences Bureau (MGB) to close down many mining companies in the country found in violation of environmental laws and those who committed human rights abuses.

“We have to stem the tide of mining disasters such as the Marcopper toxic mine tragedy in Marinduque in 1996 and Philex’s Padcal mine spill in 2012. The government should immediately shut down those mining companies who found culpable of violations of environmental laws,” JaybeeGarganera, ATM National Coordinator.

EO79 states that a performance review of all existing mining operations has to be done. The performance review can be the basis for the indictment of violating mining companies. This has been the basis of the environmental protection cases filed against the two Chinese mining companies and ATM’s call to the Department to shut down the operations a few days before the world celebrates Earth Day.

Garganera added that “mining in the country has taken severe tolls on access to water, health, and the development of agricultural activity and brought about drastic change in the environment. With climate change already upon us, mining disasters are most likely to happen with a flawed mining law and inadequate regulatory environment. Geo-hazard areas should be declared ‘no-go zones’ to mining. This should be immediately acted upon by MGB.”

On April 22, various environmental groups, including ATM will participate in the celebration of Earth Day by holding public actions in different parts of the country.

Alyansa Tigil Mina is an alliance of mining-affected communities and their support groups of NGOs/POs and other civil society organizations who are opposing the aggressive promotion of large-scale mining in the Philippines. The alliance is currently pushing for a moratorium on mining, revocation of Executive Order 270-A, repeal of the Mining Act of 1995 and passage of the AMMB.