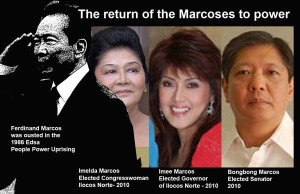 On Wednesday the United States Court of Appeals for the Ninth Circuit upheld a contempt judgment against Senator Ferdinand R. Marcos, Imelda Marcos and the Estate of Ferdinand E. Marcos. The judgment, $353.6 million, is believed to be the largest contempt award ever affirmed by an appellate court. Robert Swift, lead counsel for the 10,000 Filipino human rights victims who obtained a judgment against Ferdinand E. Marcos and his Estate in 1995, expressed satisfaction with the new judgment. “The Marcoses have thumbed their noses at the United States court and Filipino human rights victims ever since the $2 billion judgment was entered in 1995. They were caught trying to dissipate the Marcos Estate’s assets to re-capitalize their political dynasty in the Philippines. This new judgment is against Imelda Marcos and her son personally for their misconduct. It broadens the possibilities for collection of money to the human rights victims. The victims can be assured they we will vigorously and aggressively seek to collect this sum.”

The Marcos Human Rights Litigation began in 1986 shortly after Ferdinand E. Marcos fled to the Hawaii following the Bloodless revolution. After Marcos died, Imelda fiercely fought the litigation. Following an historic trial, a Hawaiian jury awarded 9,539 Filipino human rights victims almost $2 billion. On appeal, the judgment was affirmed. Even as the jury was deliberating, the Marcoses engaged in a secret deal with the Republic to render the Marcos Estate judgment proof. When counsel for the victims learned of this, they sought a contempt award against Imelda Marcos and her son, the Marcos Estate’s legal representatives, for violating the injunction which barred them from transferring or dissipating the Estate’s assets.

After five court hearings during which documents of the skullduggery were introduced, the court found the Marcoses in contempt and ordered them to pay the victims $100,000 per day until they purged their contempt. Not only did the Marcoses refuse to pay the sanction, they continued their misconduct by secretly trying to recover Marcos Estate assets for themselves. Among other things, they gave powers of attorney to an American banker to try to transfer $35 million to themselves from an account at Merrill Lynch in New York in the name of a sham Panamanian corporation known as Arelma.

On motion by counsel for the victims, the federal court in Hawaii finally entered judgment on the accumulated sanction, which totaled $353.6 million. The Court of appeals today wrote that the “$100,000 per day amount was necessary and appropriate because the Marcoses contumacious conduct” caused direct harm to the victims, by preventing them from collecting on their $2 billion judgment.