In his statement for the December 10, 2011 human rights day celebration, Jaro Auxiliary Bishop and Visayas Clergy Discernment Group (VCDG) Head Convenor Bishop Gerardo Alminaza said that the defense and promotion of human rights is the way to achieve peace. 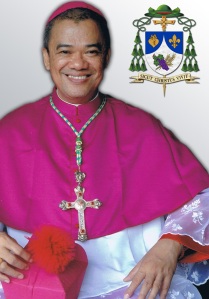 Bishop Alminaza condemned the culture of death and impunity as shown by the extra-judicial killings, Maguindanao massacre, and killing of innocent civilians in the war in Mindanao and the rest of the country.

He asserted that environmental destruction, landlessness, homelessness and joblessness are violations of the people’s right to development.

Quoting papal encyclicals and other church documents, Bishop Alminaza said that the defense of human rights or of the dignity of the human person will promote justice and equality, which in turn, will build lasting peace, since “Peace is the fruit of justice.”

“A just society can become a reality only when it is based on the respect of the transcendent dignity of the human person.”

Bishop Alminaza also explained that the people themselves must be the “principal architects of their own social and economic development,” and the role of civil authorities is to facilitate the exercise of the “people’s rights and duties” for the common good.

He asked government officials to become genuine servants of the people by promoting human rights and by not seeking personal benefits or prestige.

As “peace is not a mere absence of war”, Bishop Alminaza called on concerned groups and institutions, that in the peace talks, foremost to be addressed must be the defense and promotion of human rights.

Bishop Alminaza emphasized that the church involves in the “just ordering of society” through the promotion of human rights, since God revealed himself in the Old Testament as the “liberator of the oppressed and the defender of the poor.”

He also exhorts the faithful to offer prayers, sacrifices, and good works on December 10, Human Rights Day, which is also the 63rd anniversary of the Universal Declaration of Human Rights.