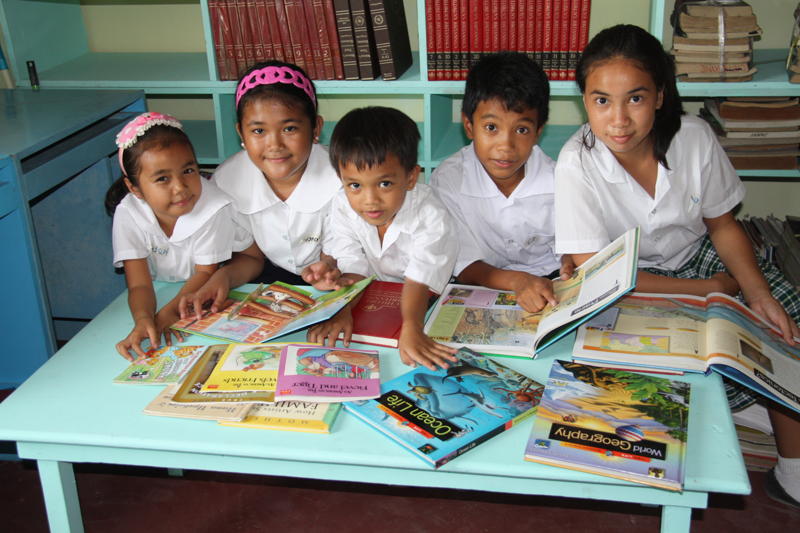 Ondoy Children Enjoy Books. Children traumatized by Typhoon Ondoy and the fires and violent demolitions in Metro Manila excitedly go over children’s books in the community library put up by the Claret Urban Poor Apostolate (CUPA) and the Kristiyano-Islam Peace Library (Kris) at a resettlement area in Montalban, Rizal. CUPA and Kris officials have called on the government to improve living conditions in resettlement areas so as not to waste P27 billion in reconstruction programs with many relocatees returning to the metropolis to escape harsh living conditions in resettlement sites. Photo by KRIS

A Claretian priest and organizers of the Kristiyano-Islam Peace Library (Kris) opened up a community library in a resettlement site in Montalban, Rizal Friday with a call for the humane treatment of relocated victims of Typhoon Ondoy and Metro Manila fires and demolitions. 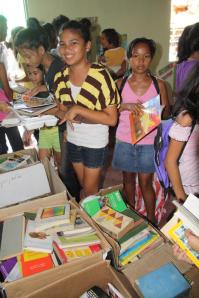 Fr. Eduardo Apungan CMF, head of the Claret Urban Poor Apostolate (CUPA), lamented that there is no serious effort on the part of the government to make resettlement areas that cost billions to build livable, thus thousands of relocatees end up selling their units and returning back to Metro Manila.

“These people have suffered so much from the deluge of Typhoon Ondoy, the loss of relatives and properties from fires; and trauma from forced demolitions. The least we can do is to help them resettle in far-flung places they can call home,” Fr. Apungan said during the opening of the CUPA-Kris Peace Library in a resettlement site in Barangay San Isidro, Montalban, Rizal.

Armand Dean Nocum, founder of the non-government group Kris Peace Library, noted that recent figures from the National Housing Authority (NHA) show that it had earmarked P27.194 billion to relocate 125,265 families of informal settlers, who are also commonly called “squatters.”

“This 27.194 billion will just go down the drain without the government really solving the problem of urban congestion because there is no serious effort to make relocation areas attractive to previously urban-dwelling people,” Nocum said.

Fr. Apungan observed that in the resettlement site in Barangay San Isidro, for example, thousands of people who had relocated there early this year remain without light, water and other basic facilities. In other areas, relocatees suffer from floods which they had supposedly fled from in Manila.

The resettlement area being helped by CUPA is home to 10,000 families who were victims of Typhoon Ondoy and the series of fires, demolitions of informal settlers communities in Guadalupe-Laperal  Compound in Makati, North Triangle, Botanical Garden, New Manila, Agham Road in Quezon City; and San Juan, Pasig, Navotas, Taguig and other places in Metro Manila.

CUPA and Kris Library put up the community library with the help of the Kapatirang Claretiano Inc. (KCI) – a group of Claretian ex-priests and seminarians co-founded by Nocum – to enable thousands of students in the resettlement community meet their educational needs even without computers and Internet-based information in the absence of electrical power.

CUPA put up the library structure with donors of Kris, KCI and NHA area coordinator Beth Matipo providing the three sets of encyclopaedia and about 600 children’s books, reference books, textbooks and other educational materials. Kris and other donors also distributed school supplies and bags to the students in the resettlement site.

CUPA is working to build a “just and humane place of living” for families in resettlement areas; while Kris Library is engaged in the building of libraries, refurbishing of ill-equipped libraries; and distribution of books to advance the cause of education in far-flung areas, especially Mindanao.

The CUPA-Kris-KCI Library is the third for Kris, which started building libraries in Zamboanga City and Quezon City in 2008.