Posted on May 14, 2011 by Human Rights Online Philippines 7 comments 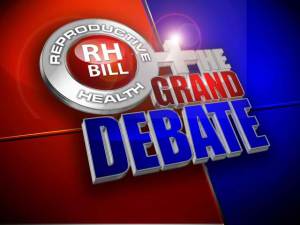 The definitive debate on the Reproductive Health Bill, the most divisive issue facing the country today, airs May 22 from 8:45 – 10:45 pm only on GMA News TV.

No ordinary debate, GMA News and Public Affairs has given participants of ‘RH Bill: The Grand Debate’, weeks to carefully prepare their oral arguments. This guarantees every important aspect of the debate will be represented.

The debate’s umbrella question is this: Are you for or against the controversial House Bill No. 4244, also known as the Reproductive Health Bill?

Three motions or sub-topics will be tackled by the debaters: RH Bill as pro-choice, RH Bill as pro-poor and the RH Bill as being pro-women. After presenting each side, interpellation will proceed.

This early, anti- and pro- RH Bill representatives from the government, religious groups and the women’s sector are working on their arguments. A three-man team will serve as panel of reactors. The reactors will base their comments solely on the merits of the debate and not on their personal opinions about the issue.

The public can already participate in an online debate by sharing their opinions using the hash tags #proRH or #antiRH on Twitter.

GMA News and Public Affairs is keeping the list of participants and reactors under wraps at this point but for sure RH Bill: The Grand Debate will be hosted by respected news anchor Mel Tiangco. Ably assisting her will be GMA News TV personalities, Pia Arcangel and RJ Ledesma, former competitive collegiate debaters.