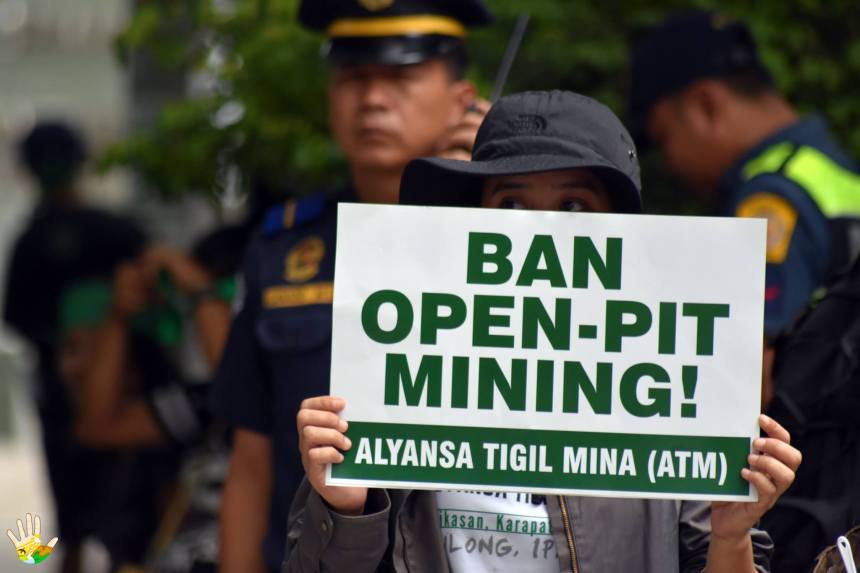 The Bishops-LGU-Community dialogue activity was co-hosted by Bishop Jose Elmer Mangalinao of the Diocese of Bayombong and the Provincial Government of Nueva Vizcaya. It was organized by the National Secretariat of Social Action (CBCP-NASSA), the Philippine Misereor Partnership, Inc. (PMPI) and Alyansa Tigil Mina (ATM).

Padilla reiterated the stance of the province, in demanding the immediate cancellation of the mining contract of OGPI. “This issue created political and social division and increased crime incidence in the region. The mine operations contaminated watershed. Its tailings do not only pollute Didipio but the entire Nueva Vizcaya. What has been destroyed by mining could not be repaired” he stated.

“Freedom is spontaneous obedience of the law. If the FTAA has expired, what is the basis of Oceanagold to operate? The company appealed the removal of the checkpoint in court. They can feel the strength of the community,” Padilla added.

Meanwhile, Bp. Mangalinao shared his reflection on the mining issue in Nueva Vicaya. “Convergence is the reality of ‘together we are one, together we achieve more. This speaks of the strength of communities in facing hardships. With Laudato Si, CBCP is more serious and upfront on its actions to protect our common home,” he said.

Last September 24, 2019, the Mines and Geosciences Bureau (MGB) announced the interim renewal of OGPI’s FTAA in a press conference despite public resistance and clear LGU directives. Environmental groups and local governments from Nueva Vizcaya expressed their disappointment on the development.

“The strong resistance of local communities from Nueva Vizcaya against mining shows the trauma they experienced from the destructive effects to livelihood, land, and water. We must never allow another 25 years-worth of damage to environment and violations to human rights,” according to Jaybee Garganera, ATM National Coordinator.

International news agency Reuters published: ‘OceanaGold suspends Didipio mine operations in Philippines amid dispute’ as the dialogue was in progress. Didipio communities, ATM, and partners were extremely delighted on the development. Years of struggles have finally paid off.

Reuters wrote, “OceanaGold had initially stopped trucking while operations at Didipio continued, despite a move by the Nueva Vizcaya government to impede access to and from the mine site.”

In a statement from OceanaGold President and CEO Mick Wilkes expressed that with the timing of the Court of Appeals injunction decision uncertain, and efforts to finalize a renewal of the FTAA ongoing, they have no other choice but to temporarily suspend production at Didipio.

Nonetheless, anti-mining groups will remain vigilant. OceanaGold’s suspension of the Didipio mine is only temporary. As long as the application for FTAA renewal of OGPI is not rejected or scrapped by the Office of the President, the people’s barricade will stay.

“Mining is contrary to the essence of Laudato Si. Extreme weather events, global warming, and disasters due to the climate emergency call for bolder actions towards environmental protection, and the passage of the Rights of Nature. The National Secretariat for Social Action (NASSA)/ Caritas Philippines will continue to support the people’s barricade in Didipio,” said Fr. Edwin Gariguez, Executive Secretary of NASSA.