[From the web] CREATING A MARCOS? Reviving the anti-subversion law under Duterte -RAPPLER.com 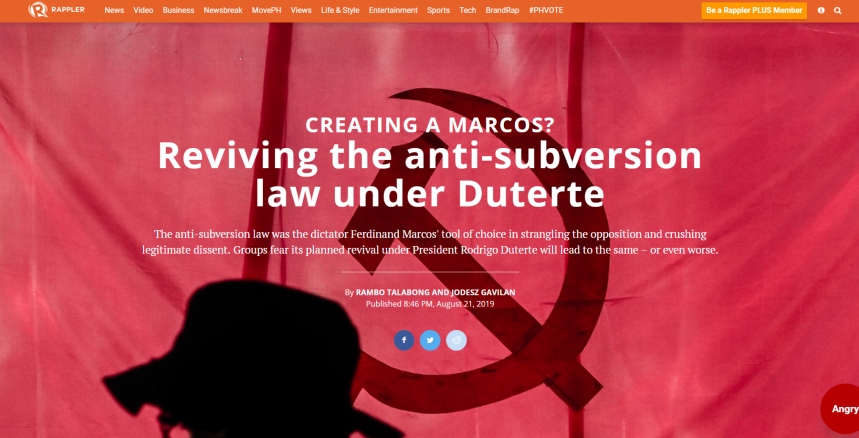 In June 2006, two young women traveled to Hagonoy, Bulacan to see how farmers were toiling and tilling the land.

One was a student researcher, the other was a pregnant community organizer. They were drawn to the workers and their stories about their land and how somehow, they never seemed to make enough.

The young women were on a mission, hoping to change what they saw.

But they did not go far.

On June 26, Karen Empeño and Sherlyn Cadapan were dragged out of their rented house, blindfolded, pulled into a jeep by gun-strapped men wearing army fatigues. A farmer, Manuel Merino, tried to stop them, but he was also taken along with them.

The military said they had not the faintest idea where the two women were. What the major general who ruled over the area, Jovito Palparan, said was this: his men took two female communist rebels in Hagonoy, Bulacan, but they were not the missing women.

None of them have come home – daughters forever younger than 30 in the memory of their mothers, snatched on mere suspicion of having communist ties.

The story of Cadapan and Empeño comes to mind as the Philippine government mulls the return of the anti-subversion law, which makes arrests based on communist ideology – even mere suspicion of it – within easy reach of the police and the military.

Many of the country’s key democracy and human rights icons were charged with subversion during the Marcos dictatorship, including statesman Jovito Salonga – a senator who faced subversion charges after he was implicated in the Metro Manila bombings in 1980, but was cleared of crimes by the Supreme Court 5 years later.

It’s a push that did not come from nowhere. Consider the longstanding conflict of the Philippine government against communists. It has produced its own star lobbyist for the revival of the anti-subversion law, whose reputation for hunting rebels rivals Palparan’s.

Also consider the President, who has tried to patch up the conflict with the movement, but has instead been disgraced. (READ: The end of the affair? Duterte’s romance with the Reds)