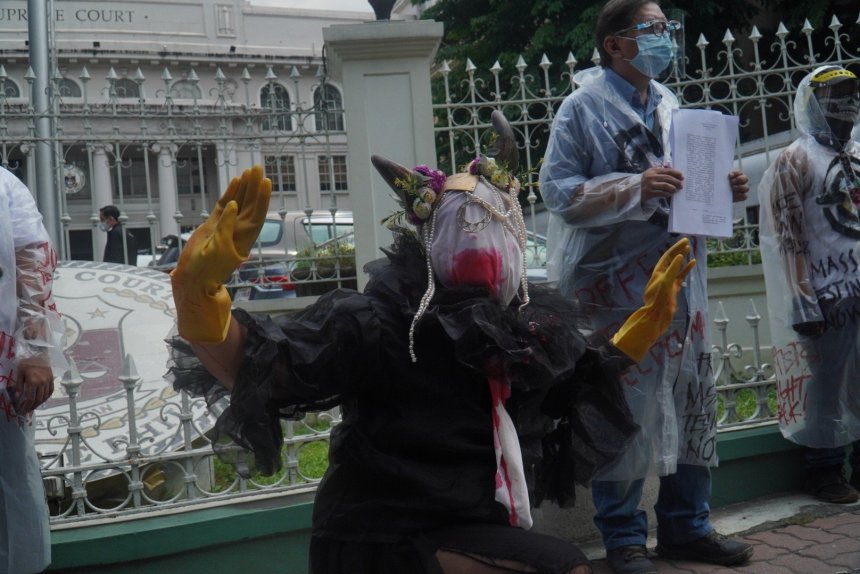 Today, July 23, 2020, we, the National Union of Journalists of the Philippines, together with Rappler journalists led by Glenda Gloria, ABS-CBN’s Ces Oreña Drilon, members of the Concerned Artists of the Philippines, led by their chairman Neil Doloricon and chairman emeritus and National Artist Bienvenido Lumbera, and other journalists, artists and cultural workers whose professions and existence depend on freedom of expression and freedom of the press, filed a petition for certiorari and prohibition before the Supreme Court against Republic Act 11479, or the Anti-Terrorism Act of 2020.

With this petition, filed as GR No. 252747, the 13th to be filed, we join many more petitioners seeking to have this draconian measure, which should rightly be called the TERROR Law, struck down for being unconstitutional and a clear danger to all our rights and liberties.

We join others who have filed petitions ahead of us in seeking to have this draconian measure, which should rightly be called the TERROR Law, struck down for being unconstitutional and a clear danger to all our rights and liberties.

We contend that the law’s vague definition of what constitutes terrorism, and its inordinate focus on “intent” instead of actual acts leaves open its application to practically anything and everything anyone might say or do.

Even parts of the law Government claims protect people from potential abuse actually leaves them vulnerable because acts supposedly excluded from coverage are qualified by the phrase “not intended to cause death or serious physical harm to a person, to endanger a person’s life, or to create a serious risk to public safety.”

Section 9 of the law, which criminalizes the newly minted offense of “inciting to commit terrorism,” definitely includes free expression as an element of the crime, in direct contravention of Article III, Section 4 of the 1987 Constitution: “No law shall be passed abridging the freedom of speech, expression, or of the press, or of the right of the people to peaceably assemble and petition the government for a redress of grievances.”

And, of course, the law tramples on our basic rights by allowing an executive body to decide on people’s arrest and detention without a warrant for up to 24 days – way beyond the 3-day limit imposed by the Constitution – and stripping the judiciary of its exclusive authority to determine whether a person should be deprived of liberty.

It is clear that the Terror Law is anathema to democracy. For all Filipinos who cherish liberty, there can only be one response: Resistance!