Human Rights Watch statement on the positive response by Philippine authorities to the call for the early release of qualified inmates as part of COVID19 intervention:

Human Rights Watch is heartened that Philippine authorities have responded to the call by several groups calling on the government to release inmates in its prisons who face low-level and non-violent charges, as well as the sick and the elderly. The move by the Bureau of Jail Management and Penology (BJMP) and the Department of Social Welfare and Development (DSWD), to name at least two government agencies who responded positively to the call, is very encouraging. It is imperative that the BJMP, the Department of Justice, the Public Attorney’s Office, and the courts expedite this process for the welfare of the tens of thousands of Filipinos crammed in overcrowded jails and detention facilities across the country. While this should have been acted upon earlier and without prodding from families of inmates and their advocates, it is not too late to mitigate the potentially catastrophic impact of the coronavirus on the country’s prison population. 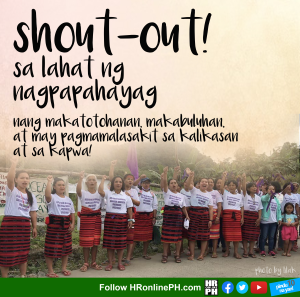