IF ANYONE wants to have a glimpse of how rich Nueva Vizcaya is in mineral resources, consider this: It is host to two of the only six large-scale mining projects in the country that have been given the green light by the government to start mineral extraction.

The Didipio gold-copper project and the Runruno gold-molybdenum project, owned by Australian firms Oceanagold Philippines Inc. and FCF Minerals Inc., respectively, cover a combined area of 20,720 hectares in the upland towns of Kasibu and Quezon.

About 31,000 ha more are covered by 10 ongoing exploration projects, mainly for gold.

Geologists estimate the expected output of gold for both projects at 4.1 million ounces. At the current market price of $1,430 per ounce of gold, Nueva Vizcaya’s deposits may be valued at $5.86 billion, or P252.1 billion. That’s for gold alone.

It is this vast underground wealth that has held the province and its people virtual hostages to a decades-old controversy, caught between the conflicting interests of foreign mining companies, the government and promining groups, on one hand, and proenvironment, civil society and antimining residents, on the other.

For the government and the mining firms, the mineral deposits are so huge to be ignored. So despite the prolonged opposition and setbacks—which meant delays in the operation and added costs—they have chosen to stay and woo critics with messages that revolve around “responsible mining.”

Antimining groups would not budge. Led by the Catholic Church, they have maintained a stand that large-scale mining destroys people’s lives and the environment. This was summed up in the battle cry espoused by Bishop Ramon Villena in a Feb. 28 statement: “No to mining; yes to life.”

But for some villagers from Didipio and Runruno, many of whom have been earning from gold panning, their fight against large-scale mining is simply about survival. Mining is not bad, they say, and the government should instead encourage small-scale mining that is properly regulated to provide local jobs.

To mine or not

The question on whether Nueva Vizcaya’s mineral deposits should be mined and if so, who should mine them, has again come to the fore, triggered by recent developments surrounding FCF Minerals’ Runruno project.

On Feb. 28, FCF Minerals obtained the third approval for its $150-million Runruno venture, after the provincial board voted 11-2 in favor of a resolution of endorsement—with certain conditions. The project had earlier secured the nod of municipal and barangay councils as proof of social acceptability required under the Philippine Mining Act of 1995 (Republic Act No. 7942).

The latest approval, however, was met with criticisms from groups disgusted over the supposed haste by which the board endorsed the project.

“This is an act of betrayal of the 11 (board) members on their campaign promises of caring for the people, putting their welfare as priority, making the common good as the essence and core of their governance,” Villena said in a recent pastoral letter.

Board members, however, said the Runruno project would benefit the province.

“This [endorsement] is a democratic and governmental process [where the] majority rules. Don’t we have separation of the Church and the State? It may not also be proper that the majority always yields to the stand of the church [especially so that] their opinion lacks factual basis,” Board Member Epifanio Galima Sr. said.

Gov. Luisa Cuaresma wrote President Aquino to air her objection to the FCF gold project, citing, among six other grounds, studies that Runruno is highly susceptible to landslides and flooding.

“The operation of the mining project will worsen the already fragile situation of Runruno and may eventually speed up the probability of flashfloods and landslides, which may even spill over to the low-lying barangays of Quezon and the [neighboring towns of] Solano and Bagabag,” she said.

Large-scale mining is not one of the strategies in the province’s development plan, Cuaresma said. This is also inconsistent with Nueva Vizcaya’s role as “watershed haven” for Cagayan Valley, she said.

Craig Watkins, FCF country manager, said the company had prepared a comprehensive plan to address environmental effects that the project would cause, and that consultations had been held with affected communities.

Vice Gov. Jose Gambito said Cuaresma had become a staunch critic of mining projects, adding that she had been “traumatized” by experiences from the Didipio project.

In 2008, Cuaresma led provincial officials in barricading roads in Didipio to stop Oceanagold’s earth-moving activities. This was after the company, supported by the Department of Environment and Natural Resources, refused to pay quarry taxes imposed by the provincial government.

“The [board] has also withdrawn its endorsement of the project. But sadly, they are still there,” Gambito said. 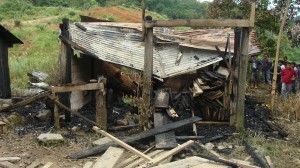 In January, the Commission on Human Rights passed a resolution urging President Aquino to revoke Oceanagold’s Financial or Technical Assistance Agreement (FTAA) based on findings that the company committed human rights violations when it tried to prepare its mine site in Didipio and clear residential areas.

The violations included harassment and intimidation against residents and illegal demolition, with the use of armed men.

Oceanagold remains optimistic about the future of its project.

“[Oceanagold] is compliant with all the laws and regulations associated with operating as a foreign company in the Philippines and is committed to ethical, responsible and sustainable mineral development,” Darren Klinck, Oceanagold vice president for corporate and investor relations, said in an earlier statement.