The protesters will assemble at Urban Market, Lupang Pangako in Payatas B area and will have short programs at Litex Market and the House of Representatives in Batasan Complex before they stage the 10-kilometer march from Commonwealth to Quezon City Hall, where they will stage a protest vigil.

The protesters also had a picket at the main office of the National Housing Authority (NHA).

Leaders of Anakpawis, Kadamay and AKD said Mayor Herbert Bautista is interested in expanding the Payatas dump rather than addressing the housing problem of urban poor families.

Manila – Anti-Epal activists, led by Mae Paner dressed as the popular character Juana Change, trooped to the Comelec to join the thousands of political candidates to file their certificates of candidacy on the first day of filing for the May 2013 elections. Candidates will have until the Friday, October 5 deadline to file their intention to run.

“I am here today to file my certificate of candidacy for the Epaliticians’ Party List, or EPaL, along with my family members who are also running for political office,” declared Paner as Juana Change. “I have with me my Auntie Sen Change, husband Don Juan Change IV, my sister Yoko Change, my son Juan Change V, and my granddaughter Juanita ‘Luce’ Change. We call her ‘Bariya’. We are here to continue the legacy of Change that my late great grandfather started in 1898. In Philippine politics, Change is inevitable. My father and mother are here to witness the continuation of the Change legacy. Even my great grandfather is here, but he’s in an urn,” added Paner wryly, tongue firmly in cheek.

Members of the No More Epal Movement joined the real filers today to highlight what it calls the “deeper problems of Philippine politics.” In a press statement, the group said that the problem of “epal”, “the habit of politicians to claim personal credit for publicly funded projects and programs,” is only a symptom of the deeper problems of patronage politics, family dynasties, and campaign finance, among others. “Many of our supporters have asked if we are only focused on the problem of ‘epal’. Many have even suggested that we should go beyond epal,” said Vincent Lazatin, founder of the No More Epal Facebook page. “We are here today to start a deepening of the discussion of our politics. Epal is merely a symptom of our rotten politics. We must direct our campaign to the real issues.”

Paner was accompanied by theater actors and members of Dakila, as the character Tita Sen Change, and other performance artists filling in the roles of Juana Change’s relatives. “It may seem ridiculous to come here with members of the Change family all of whom intend to file their certificates of candidacy, but this is what our politics has become – a family business,” said Kate Lim from the artist group DAKILA. “Look around and you will see mother, daughter, husband, son, brother, sister all running for various positions in politics. It’s crazy. We are here today to highlight just this one aspect of our politics, but there are so many other problems as well. The No More Epal Campaign, which has been surprisingly popular, is really only an entry point to discuss the poor state of our politics and political institutions,” Lim added.

The anti-epal movement has gained a lot of popularity in recent months as an online campaign has caught the popular imagination. Aside from online campaigns on the popular social networking site Facebook, there are websites and blogs that have taken up the anti-epal campaign. Some public officials such as Mayors Alfredo Lim and Herbert Bautista of Manila and Quezon City, respectively, have ordered signs and billboards bearing their names and images taken down. Both Mayors Lim and Bautista have separately said that the signs and billboards have been put up without their approval by their supporters.

Mayor Herbert Bautista is expected to sign the new ordinance on Tuesday, and it will be fully implemented by January of 2012.

In a press conference Monday morning, city councilors led by Vice-Mayor Joy Belmonte defended the SHTO, which will impose an additional 0.5% tax on land owners in quezon city.

Only homeowners with city-assesed real property values exceeding P100,000 will be covered by the new tax.

Belmonte said the ordinance is just and necessary to give informal settler families a better quality of life, which in turn will spur further development in the city.

MANILA, Philippine – Tensions rose as authorities attempted to demolish some 1000 houses in Barangay (village) Old Balara in Quezon City Wednesday morning but authorities are trying to prevent an outbreak of violence through negotiations, according to reports culled by INQUIRER.net.

A 990AM report said residents became hostile as they prevented the demolition team together with some 200 policemen deployed in the area from taking down their homes. Some residents also barricaded the middle of Commonwealth Avenue, causing traffic in the area.

[Photo Blog] Hearing on the killing of an Agta Chieftain, and forced eviction of IP from their ancestral land in Aurora Province

Photos were taken on June 8, 2011, at the House of Representatives Committee on Cultural Communities’ hearing on the killing of Armando Maximino-Agta Chieftain, and forced eviction of indigenous people from their ancestral land in Sitio Delebsong, Barangay Nipoo, Municipality of Dinalungan, Aurora Province. 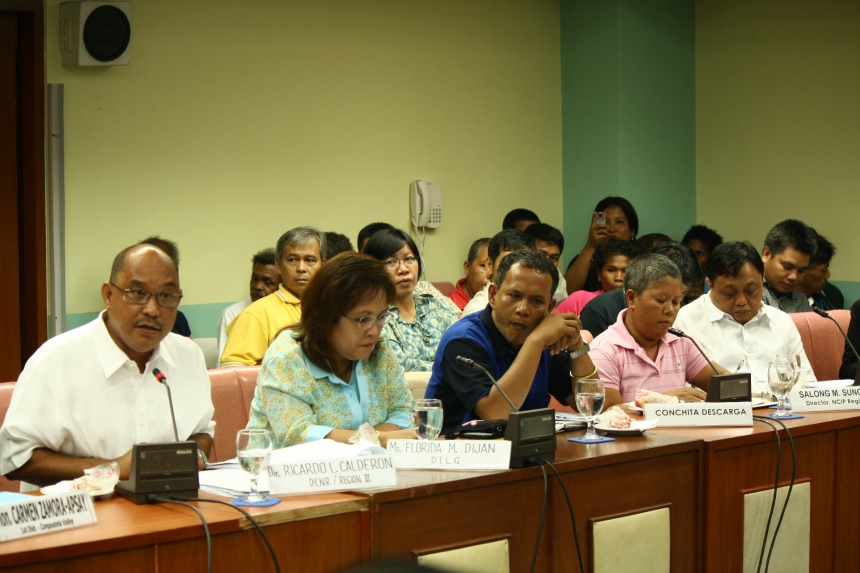