The Philippines has lost a beloved human rights defender. Jose Luis Martin Gascon, known to all as “Chito,” who had chaired the governmental Commission on Human Rights since 2015, died October 9 from complications due to Covid-19, his family said. He was 57.

Friends and allies in the human rights movement mourned Gascon’s passing. “The country lost a dedicated public servant who never cowered in fear in asserting people’s rights and civil liberties,” said Fides Lim, spokesperson of Kapatid, a group advocating for the rights of political prisoners. “Amid the challenges faced by the CHR … he carried on with dignity, strength and courage,” said Jacqueline Ann de Guia, Gascon’s colleague at the commission. Even the military, often the target of commission investigations, paid its respects.

END_OF_DOCUMENT_TOKEN_TO_BE_REPLACED

[Statement] On the passing of CHR Chair Gascon | PMCJ

Chito led his inquiry into the effects of climate change to human rights through discussions with petitioners and victims of Climate Catastrophe in the Philippines, as well as scientists and experts on climate change.

END_OF_DOCUMENT_TOKEN_TO_BE_REPLACED

It is with deepest sorrow that we announce the passing of Chairperson Jose Luis Martin “Chito” Gascon. He passed away early this Saturday morning, 9 October 2021, due to Covid-19 complications. He was 57.

At a time of unprecedented human rights challenges, Chair Chito courageously and steadfastly upheld the constitutional mandate of the Commission. Amidst the unrelenting attacks against the institution and to him personally, he was unwavering and unflinching in fighting for the universal values of freedom, truth, and justice that are essential in the pursuit of human rights. He was undaunting in the fight for human rights, rule of law, and democracy out of deep reverence to the equal rights and dignity of all.

END_OF_DOCUMENT_TOKEN_TO_BE_REPLACED

Posted on May 26, 2016 by Human Rights Online Philippines Leave a comment 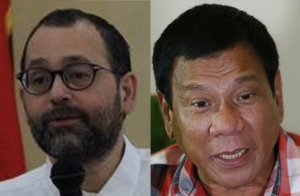 The Commission on Human Rights (CHR) today released its resolution on Case No.
2016-078 involving the complaint filed by women leaders against Mayor Rodrigo Duterte
for Violation of the Magna Carta of Women for words & acts by him during the Presidential
campaign.

The CHR, in the dispositive part of the resolution, found the words & actions of
Mayor Duterte to be discriminatory of women that is enjoined by the Magna Carta of
Women. The CHR has asked the Civil Service Commission (CSC) and the Department of
Interior and Local Government (DILG) to consider taking appropriate measures for the
violation of the Magna Carta by Mayor Duterte.

Chairperson Chito Gascon said that, “The CHR has the sacred constitutional duty to
protect human rights and to call out persons when these rights are violated no matter what
their position in society may be. The Commission beheves that this mandate does not
exculpate Mayor Duterte from acts committed or words uttered in the course of the
electoral campaign when it involves breaches to fundamental rights, in this case, the
prohibition of gender-based discrimination and violence,”

The same resolution had also made further recommendations to other government
agencies to take positive steps to prevent similar incidents from further happening, to wit:

1. For the Congress to revisit the Magna Carta of Women and to include other
punitive sanctions for direct violations by individuals of the rights
enumerated therein; and to amend Republic Act No. 7877, otherwise known
as the Anti-Sexual Harassment Act, in order to require all employers to
conduct yearly gender sensitivity seminars for all its employees;
2. For the Commission on Elections to ordain and institute a code of conduct for
candidates for public office and political parties to adhere to gender-sensitive
language and conduct during campaigns, and to promote the rights of
women;
3. For the Department of Education and the Commission on Higher Education,
and other educational institutions, to incorporate gender mainstreaming and
gender sensitivity education in their curricula in order to foster a culture of
respect for the rights of women; and

4. For the Civil Service Commission to study the passage of a resolution
requiring all government officials to undergo yearly gender sensitivity
seminars pursuant to Philippine obligations under the Magna Carta of
Women and the Convention on the Elimination of All Forms of
Discrimination against Women, and to adopt measures to eliminate
prejudices and customary practices that are anchored on the idea of the
inferiority of either of the sexes or their stereotypical roles.

CHR expressed hope that because this complaint had been given due course and
that after serious consideration a resolution on the matter has been issued involving the
conduct of Mayor Duterte, that all stakeholders and in particular public officials would
at all times deport themselves in fully respecting the rights of women guaranteed by the
Magna Carta of Women.