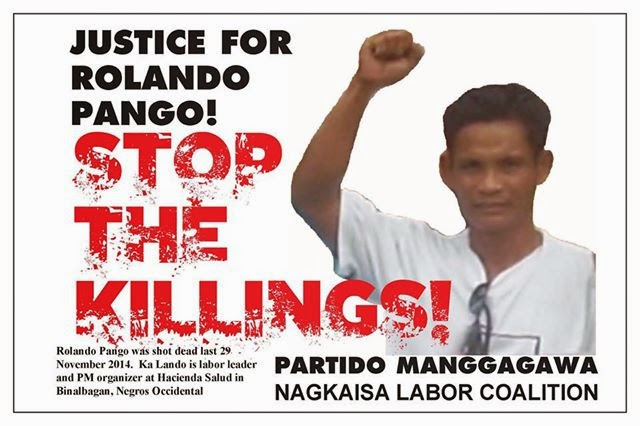 On the occasion of International Human Rights Day, the Partido Manggagawa asked UN Special Rapporteur on the Situation of Human Rights Defenders Michel Forst to inquire on the killings of labor activists in Negros Occidental. “The culture of impunity and extra-judicial killings of labor activists persists under the administration of Benigno Aquino III. In the last two years, two farm worker leaders have been killed while another survived an assassination attempt, all in Negros where agrarian and labor disputes simmer,” stated Renato Magtubo, PM national chair.

Forst is in the Philippines and has expressed interest in requesting the government for an official visit and investigation after meeting with human rights groups over the past several days. Two predecessors of Forst were unable to obtain invitations from the government to inquire into reports of attacks against human rights defenders in the country.

The spate of killings against worker and land rights defenders in Negros happened amidst agrarian and labor disputes between farm workers and sugar planters. Last November 29, Rolando Pango, a PM member, labor leader in Binalbagan town and an organizer in neighboring Isabela town died after being shot in the head by two men. Pango had previously received death threats while he was assisting workers of Hacienda Salud in Isabela town in processing for coverage under land reform and in filing illegal dismissal charges against landlord Manuel “Manolet” Lamata. Lamata heads the powerful Negros sugar planters association.

PM also called on the Department of Labor and Employment, the National Tripartite Industrial Peace Council and the Department of Justice to take cognizance of Pango’s case as they have a mandate to act on labor-related extra-judicial killings.

Since 2011, the labor coalition Nagkaisa!, of which PM is an affiliate, has been engaged in dialogue with the Aquino administration on key labor issues, including some 62 unsolved cases of labor-related extra-judicial killings.

Magtubo added that in December 29, 2012, Victoriano Embang, president of the Maria Cecilia Farm Workers Association (MACFAWA) in Moises Padilla town, was killed amidst another agrarian and labor dispute with the influential Montillano clan. His brother, Anterio, also a leader of MACFAWA, later survived an ambush in February 28, 2013.

Still PM insisted that the most widespread infringement of human rights in the labor front is the violation of workers’ right to freedom of association and collective bargaining.

“The onslaught of state-sanctioned contractualization schemes have effectively disarmed workers of their ability to defend themselves, through their unions, against many forms of abuse and exploitation” concluded Magtubo. 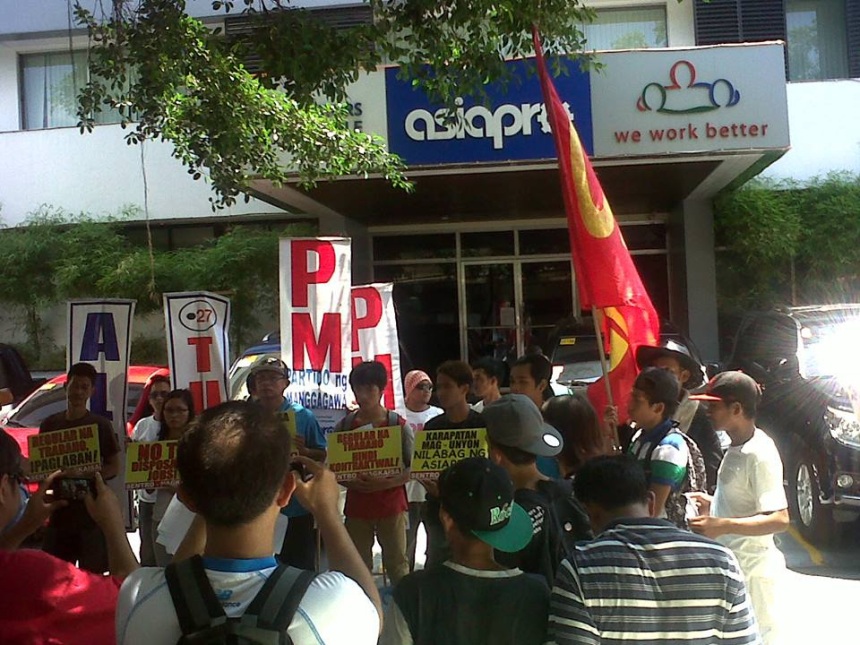 After mounting a successful resistance against the outsourcing program at Philippine Airlines (PAL), labor groups under the Nagkaisa coalition now turn their ire against the operations of manpower cooperatives that purposely serve outsourcing needs of many companies.

Few days before the celebration of Labor Day, Nagkaisa called on the government to clamp down on manpower cooperatives particularly those that were actively involved in labor-only-contracting and non-compliance to labor standards.

In a protest rally held Friday at the offices of the Asiapro Cooperative in Pasig City, Nagkaisa members lambasted the manpower agency for hiding under the cloak of cooperativism to satisfy corporations’ callous demand for contractual labor. They also accused Asiapro of active involvement in anti-union activities.

Asiapro prides itself to be the first and biggest manpower cooperative in the country, with 34,000 of its members, deployed to several dozen companies nationwide.

“Cooperativism is akin to unionism hence we cannot, in principle, go against the concept of cooperativism. However, the relationship is becoming adversarial when a cooperative transforms itself into a conscious instrument for undermining labor rights,” said Wilson Fortaleza, Partido ng Manggagawa spokesperson and Nagkaisa convenor.

The case of Asiapro, he said, reveals the kind of anti-labor practices many manpower cooperatives are involved — principally as suppliers of contractual workers and consequently as in-house violator of labor rights of its member/employees such as non-payment of wages and other mandatory benefits such as SSS.

Asiapro usually invokes its cooperative nature to evade compliance to labor laws.  Its executives made this admission during the public hearings conducted by the Provincial Board of Bukidnon in 2010 and in its many pleadings before the courts.  Asiapro is Bukidnon’s biggest contractual labor supplier, with 5,000 of its workers deployed in the province’s banana and pineapple plantations.

The Supreme Court, however, ruled in G.R. No. 172101, the existence of employer-employee relationship between Asiapro and its associate members therefore it must comply with core labor standards and other labor-related laws.

But Asiapro seems undeterred by this ruling, perhaps because of a strong backing from former labor secretary Benny Laguesma.   Last March, Asiapro was able to stop, through a TRO, a union certification election in Galeo Equipment and Mining Company, a contractor that hauls mine waste from the open pit mining site at the Carmen Copper mine in Toledo City.

A total of 285 Galeo workers had already voted by the time balloting was stopped. Another 275 Galeo workers were unable to cast ballots and were disenfranchised due to the TRO.

The election dispute arose from an attempt by the Asiapro manpower cooperative to prevent the unionization efforts at Galeo.  Asiapro is claiming that the Galeo workers are their members and thus exempt from unionization. Galeo workers did not even know that they were members of Asiapro.

Nagkaisa had been pushing for the passage of the security of tenure bill in Congress to deter the plague of contractualization in the country.  President Aquino, however, did not certify the bill as urgent.