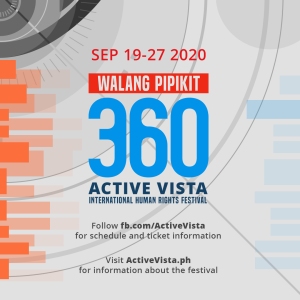 LOS ANGELES/MANILA — Sept. 23, 2020 — For Immediate Release: Basurero, which made its critically acclaimed world debut in competition at the prestigious Busan International Film Festival in South Korea in 2019—where it was called a “must watch” by Asian Movie Pulse—continues its successful festival run.

Despite the current context of the pandemic and the worsening human rights situation in the Philippines, the8th annual Active Vista International Human Rights Festivalperseveres by holding its 8th edition online Sept. 19-­‐27. With the theme “Walang Pipikit 360” (No One Blinks an Eye), the festival’s mission is to encourage creative resistance against threats to life, livelihood and lifestyle by engaging the public in meaningful discourse on the human rights and democracy issues the Philippines faces today.

Festival program shorts/”Women in the Forefront”:

Basurero marks the directorial debut of Filipina-­‐American filmmaker Eileen Cabiling, who also penned the original short screenplay. Manila/Los Angeles-­‐based Cabiling is a Screenwriting Fellow graduate of the prestigious American Film Institute who has worked as a writer for Disney and as a story development producer. Born to immigrant Filipino parents in the U.S., Cabiling is drawn to the subject matter by a desire to explore the psychology of her ancestral home. Currently, Cabiling is set to make her feature-­‐length directorial debut with her original screenplay, Manhid, starring and produced by Rosales.

In Basurero … With few fish left in the sea, Bong, an urban Manila fisherman, struggles to survive.Desperate for cash, he finds himself embroiled in a dangerous undertaking. Wracked with guilt and fear, Bong feverishly seeks a way out.

The film is a fictional expose inspired by actual events and a story anonymously related to Al Jazeera by Filipino fishermen, who told of widespread human rights abuses among the nation’s most vulnerable. Rather than serving audiences a high-­‐octane expose of the violence, Cabiling renders a more nuanced portrait, taking viewers inside the psychology of a man trapped by impossible circumstances.

Says Cabiling, “What attracts me most to Bong’s story is not just the inhumane politics and the vilification and killings of drug users, sellers and the poor in the Philippines, but also how this character’s circumstances are a window into the complex Filipino psyche’s search for value in the world.”

Basurero was shot in the urban fishing port and village of Cavite City and in Metro Manila.

NOTE: Basurero is the film’s all-­‐language title. A translation should not be substituted.