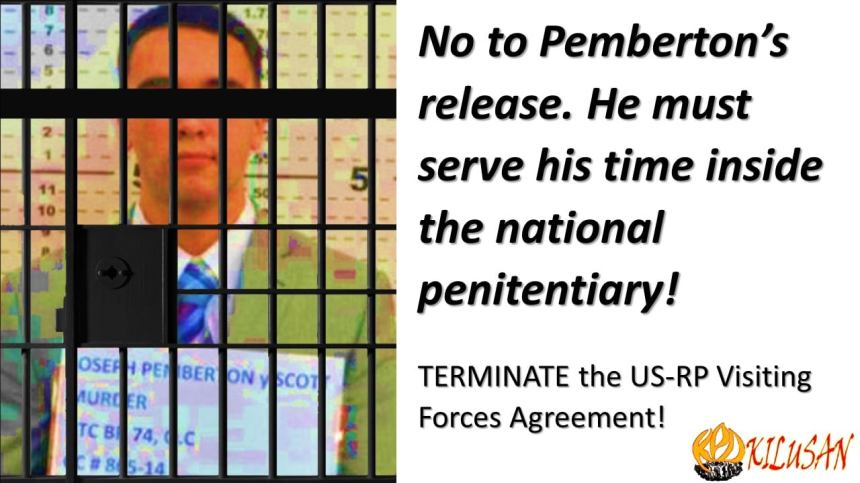 Regional Trial Court Branch 74 of Olongapo City granted Joseph Pemberton’s petition to be released because he has served his ten-year sentence in just 5 years and 8 months, including 1 year and 5 weeks of his preventive detention. The court, without factual and reasonable basis and without recommendation by proper authority, awarded Pemberton the privilege of good conduct time allowance (GCTA).

We, belonging to Kilusan para sa Pambansang Demokrasya (KILUSAN), strongly denounce the de facto commutation of Pemberton’s sentence. This is another grave injustice to the Filipino people and another travesty of Philippine sovereignty and jurisdiction.

Pemberton is not an ordinary American citizen who killed Jennifer Laude on October 11, 2014. He was a lance corporal of the US Marine Corps and thus represents the US military and state. His status and the circumstance of his presence in the Philippines then were covered and justified under the US-RP Visiting Forces Agreement (VFA).

He was preventively detained first inside US Navy ship USS Peleliu and later, after being charged with murder on December 15, 2014, was transferred to a US facility inside Camp Aguinaldo, the headquarters of the Armed Forces of the Philippines. He was convicted for homicide, not murder, on December 1, 2015. Though a national prisoner under the supervision of the Bureau of Corrections, he remained confined in the comforts of the same US facility. His close-in guards are US soldiers, his perimeter guards are Filipino soldiers.

With privileged condition of his confinement, Pemberton should not be granted the privilege of GCTA which is reserved for convicts serving time in real jails.

The same RTC Branch that convicted him for homicide, instead of murder, has committed another injustice to the Filipino people, especially to prisoners who are really qualified for GCTA.

Furthermore, with Duterte’s suspension of the termination process of the VFA, the privileged release of Lance Corporal Joseph Scott Pemberton is another hallmark of Philippines’ subservience to the US.

No to Pemberton’s release. He must serve his time inside the national penitentiary!
Terminate the US-RP Visiting Forces Agreement!