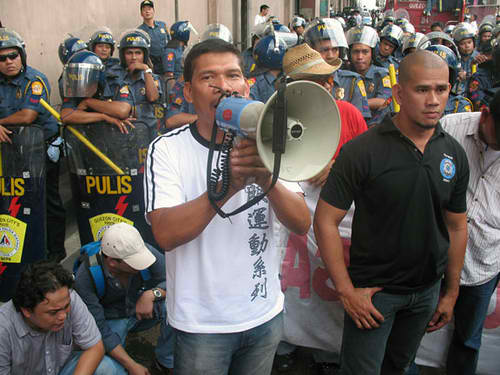 A labor leader expressed grave alarm following the recent disclosure of a memorandum issued by the national directorate for intelligence of the national police for its regional counterparts to conduct a profiling on the members of the teachers’ group Alliance of Concerned Teachers.

Ka Leody de Guzman of Bukluran ng Manggagawang Pilipino (BMP) says that the PNP should disclose and explain the objectives of their “highly dubious and disturbing” memorandum.

On some instances, teachers were also presented with an endorsement letter from division officials of the Education department urging school heads to accomodate the intelligence gathering procedures of the police.

“This is very unlikely. We have been holding elections since martial law was lifted but it has not come to the point that national police instruct its units to send text messages, hold visitations and seek the DepEd’s endorsement for them to hold an inventory of our teachers,” said De Guzman, chairperson of BMP.

He likewise demanded DepEd hierarchy to justify their endorsement that may likely lead to infringement of the legitimate rights of teachers to self-expression and self organization.

“On top of the vagueness of the intel memo, the DepEd endorsement letter also provided nothing urgent and concrete for them to urge school principals to accomodate the PNP’s surveillance of their employees,” he posited.

But De Guzman fears that the police profiling does not end with the intelligence gathering operations and the subsequent intimidation of members of the teachers’ group.

The labor leader alleges that mere mention of the 2019 mid-term election in the PNP memo should send shivers down the spine of all decent, freedom-loving Filipinos.

Public school teachers sit at the electoral board which administers the conduct of elections.

“Let us remind the PNP hierarchy or even the Interior department that any link or partiality on their part to intervene in the outcome of the 2019 midterm elections whether to promote or hamper the candidacy of any aspirant is an infraction of their mandates,” he noted.

Among the retired PNP personnel running for the senate in the mideterm elections include former chief of the PNP and Bureau of Corrections director Ronald dela Rosa and former police general Pedro Montano.

De Guzman, who also seeks a senate seat under Partido Lakas ng Masa compelled the Commission on Election to intercede and hold its own immediate and impartial investigation on the issued memoranda.

He urged the Comelec to ensure that all agencies specially those under the Executive department to abide by their mandates and hold them accountable for any violation of their duty to assist in the conduct of free, honest, peaceful and credible elections.